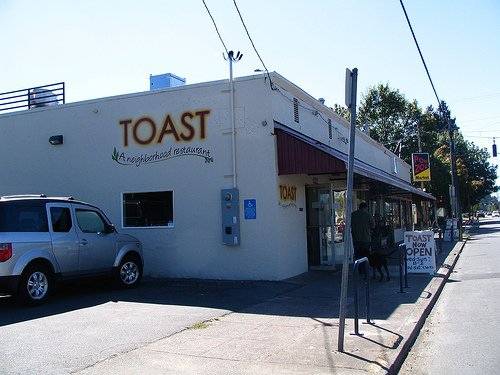 Kyle Lovell grew up near Portland — Portland, Maine, that is. Now Yakuza's manager and sake gal, Lovell admits that her move to PDX has "really rocked the way I choose to indulge," she says. "Portland has so many dining options, both day and night, it can seem overwhelming, but I have learned to revel in all of this culinary awesomeness... but being a part of this world means I work most nights. [So] what may come as no surprise is my absolute adoration for PDX brunch." Lovell's favorite spot? A Woodstock neighborhood haunt with a "hard to beat" Bloody Mary.

If Woodstock is not on your radar yet, you are missing out. One of my favorite haunts is called Toast. They are a bit off the beaten path, but it's well worth the drive/bike/walk out to SE 52nd. They welcome you with mini scones that rival Zell's, and they are always changing up the flavors of the pastry with the seasons. My best friend and I fight over who gets to order the Dismal Times every time we go. It's the perfect dish to get you through the day until dinnertime. There is something about the ground steak and greens topped with eggs. As a rule, we love to try new things, but that dish is just so damn good. The cocktail menu is on the smaller side but very solid, if are one prone to daytime tippling. Being such an avid "Bruncher," I gotta say, their Bloody Mary is hard to beat.