What's in a Name?

Share All sharing options for: What's in a Name? 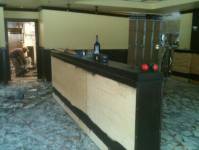 According to OLCC paperwork, the new ChefStable project slated for the former Carafe Bistro space has a name: Market, named presumably for its SW Market Street location and not for its Google-proof nature. Last week, co-owner Kurt Huffman described chef Troy Furuta's menu as "old-school Continental" (aka technique-based) cuisine. Construction on the project is now underway, with hopes to be open in July. As always, updates as they come in. [EaterWire]