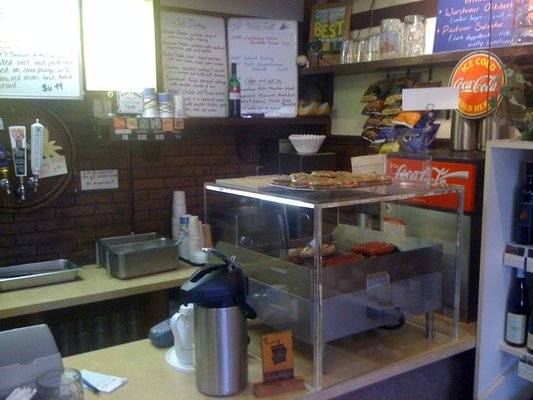 Originally from New York, bartender Adam Robinson made his bones at the Big Apple boite spot Momofuku Ssäm Bar. After making the big move to Portland 2 1/2 years ago, he's spent time behind the bar at Scott Dolich's Park Kitchen and the Bent Brick, and is currently the bar manager at the Rum Club. An active member of the Oregon Bartenders Guild, when he's not competing in cocktails competitions or traveling across country to various cocktail conventions you might find him holed up in one of his favorite delis in Southeast Portland.

Portland is chock full of hidden culinary gems, one of my personal favorites I stumbled into once by sheer accident after taking a wrong turn one day. Located just south of Powell on SE 12th Avenue is Edelweiss Sausage & Delicatessen, a small family owned Bavarian market that stocks an amazing selection of imported products including cheese, beer, wine, condiments, candy, etc... The best part is in their deli case, where everything is made in house — 20+ kinds of sausage, dozens of different lunch meats, bolognas, loaves, specialty meats, spreads, and cold salads. Most of the stuff is take-out, however there is a small lunch counter where they cook a rotating selection of sausages served with their potato salads or coleslaw — they also serve a killer Reuben sandwich. Having grown up with family that immigrated here from Germany as well as having lived in Switzerland for year as a teenager, many of these products remind me of great times of my life. In fact, every single time I eat their German potato salad it reminds me of being a 13-year-old kid sitting around my Grandma's dinner table. I love that I live within walking distance from this place. Pro-tip; they are closed on Sundays, which means the place is an absolute zoo on Saturdays.