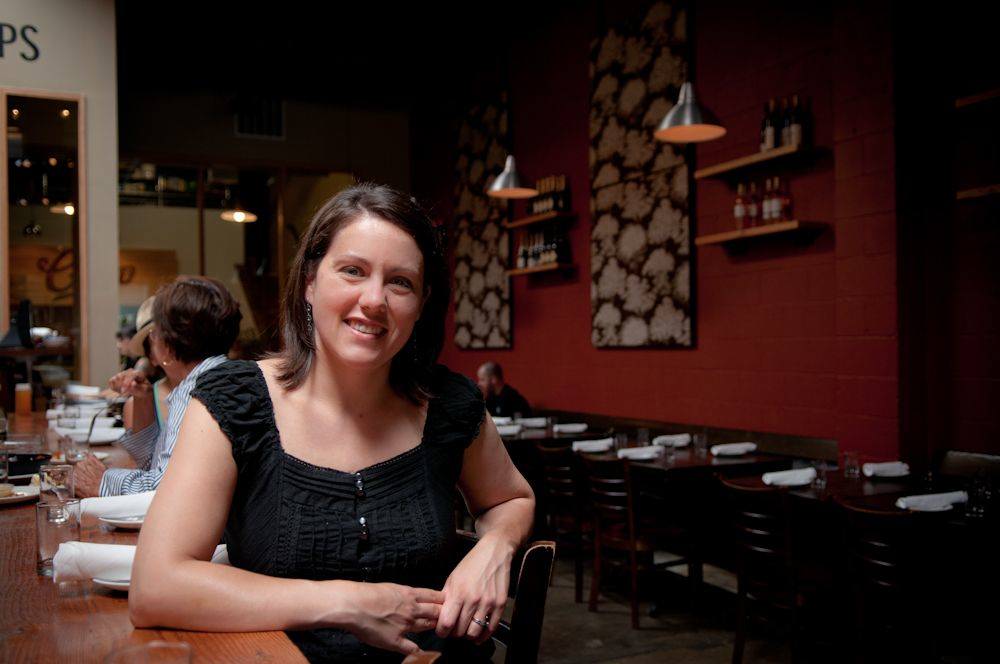 Since debuting early 2010, chef John Gorham's brunch hotspot Tasty N Sons has represented the high watermark of Portland's brunch-line insanity. "We're busy the second we open our doors until we stop serving at 2:30p.m.," says general manager Rebecca Finley, noting that the spot averages 350 covers — with diners pouncing on polenta and sausage ragu, Moroccan chicken hash, and chocolate potato donuts — during weekend brunch service. Eater sat down with Finley about camped-out diners, tricks to make that wait shorts, and why name-dropping the Tasty owner won't get you to the front of the line.

Tasty N Sons is known for having these extreme wait times for weekend brunch. So, how long are the lines really?
Saturday and Sundays, we have a line that starts forming 15 to 30 minutes before we open [at 9a.m]. Actually, this weekend we had somebody sitting out there at eight o'clock. We've seen lawn chairs, we've seen all sorts of things, especially on holidays — Mother's Day is pretty insane. But we open the doors, get everybody seated in the first five to 10 minutes, and then we have a continuing line, so we go on a wait at that point.

And what's the average wait?
There's really no average because it really depends on how many people are in parties. But average turn time for a party of two, we usually say 45 minutes to an hour, and then for groups of four and upwards, you're looking at probably at least an hour. If I have a bunch of large groups on my book, then the people that walk in later might end up getting an hour-and-a-half wait. I have seen it go up to two hours, two-and-a-half, but that's rare.

Is there anything a guest can do to make wait at least feel shorter?
We don't take names over the phone, so you do have to come in person to be added to the list. But what we always suggest for groups — especially larger groups — is to send one person in your party down, and at that point we can tell you what the estimated wait time will be, and we can take a phone number. You can go about your morning and then we'll call you. And that way, your whole party of 10 doesn't have to be sitting here, waiting for an hour.

As far as our end of things, we do things like offer cocktails; we have a big coffee station set up front, so there's plentiful amounts of coffee. We've had instances where people are having blood sugar issues — they're waiting a long time, they haven't eaten — and we're more than happy to order a biscuit for them, or a couple of dates. There's not a lot of room to stand out front and eat, but we certainly can accomodate those needs. We have a lot of small children that come in, and often the wait for them is really hard on the parents. So, we really try to make everybody as comfortable as possible. And if that sometimes means bending the rules, then we do.

Do people throw tantrums when they get quoted a 90-minute wait?
I wouldn't call it tantrums... I think we have enough of a reputation where people know there's going to be a wait when they come in, but there are those folks that come in and they're not prepared. And they do get upset. We seat the whole restaurant at once, which also means all of the tables get up at once, and we fill them as quickly as we can. But there will be an empty table sitting there, [and some guests] will basically hound you and say, 'Why can't I sit there? I see an empty spot.' And it's trying to explain to them gently that we do have several people on the list ahead of you... and all the seats in the restaurant, including all our bars and counter spots, are part of the waiting list. So, you can't just stroll in and walk up to the bar and grab an empty spot. ... It's challenging, but nobody ever throws tantrums. But there definitely are people who get very irritated. It's our job to keep that situation calmed down so it doesn't escalate.

Has it always been this crazy since Day One?
We started with a soft opening, and it was definitely not that busy from the very first day. We had time to really test and see what worked and what didn't and make adjustments — we still do, it's a work in progress and we're constantly making adjustment as necessary. And it slowly got busier and busier, and I remember the first day we were really busy, we were just like, 'Oh my god, what is going on?' And it just kept going from there, it's consistently grown.

You guys are definitely known as a "destination restaurant" for out-of-towners. But tell us about your regulars.
Considering how many people come into the restaurant, I'm surprised at how many regulars we do have, and it's awesome. John wanted this to be a neighborhood restaurant when he opened it, and that's exactly what it's become. It's really cool to see his concept realized and we have people who do trek from all the way across town or take a really long bus ride to come here, and then we have people that literally live right around the corner — and they come drop their phone number and name, and they go home and go back to bed. They're great support. ... And one thing for myself at the door is, I try to remember one person's name every week. Which doesn't seem like a lot, but when you're seeing so many people on a weekly and daily basis, it's an accomplishment for me to try to remember that person.

I asked Renee [Gorham], the GM at Toro Bravo, this question, too: Have people ever tried to drop, say, several hundred dollars to get a reservation or guaranteed table?
I haven't seen that. We definitely get calls ahead, but nothing like trying to bribe us. You always get the people who'll drop the name of the owner — 'Oh, I know John.' But John walks into the restaurant and he goes on our list. He doesn't jump the list. I remember, I did brave it one time on Mother's Day; it was two days before my son was due and I was very, very pregnant and starving. I came in and we were toward the front of the line, but we didn't get in on the first seating because there were all these people who had large groups. And I had to wait 45 minutes — that's why I have so much sympathy, because I was so not feeling it and so upset because I was very pregnant, very hungry, and didn't want to stand around and wait. But I did, it was awesome, and it definitely gave me a different perspective on people that are standing out there.

Was your staff sympathetic to you at least?
[Laughs] You know, I didn't feel like they were overly sympathetic to me. They were so busy I don't think they had time to worry about it.

So what are some of your favorite things to eat here:
Some of my go-tos: definitely the polenta and sausage ragu. The burger is another go-to — I eat mine with cheddar cheese, it drips down my face but I eat it and don't even care. And the breakfast board: chicken liver mousse, housemade beef jerky, fresh berries, and pickled beets. That was my go-to when I was pregnant; I ate it almost every day.

And finally, what's your must-have Gatekeeper tool?
If I had to choose one, I would say control. And not just being in control of yourself, but keeping control of the restaurant. As a person that works the door at Tasty, you run the flow of the restaurant for both the servers, the kitchen, and you really have to have a balancing act up at the door with customers. It's a very delicate place to be, especially when you're telling people how long the wait is going to be. You have to be very gracious and kind and try to make their wait as painless as possible, and if it means putting a Bloody Mary in their hands, that's what it means.

It's setting the vibe for the restaurant — if you stay calm and controlled up front, that's going to really infect the restaurant. If you walk in and there's 50 people around the host and you see that person is still calm, cool, and collected, and they have time for you and are not in too much of a rush to answer your questions — and get that cocktail started — you feel like you're in good hands. Maintaining control is very important at such a busy place, and you'll do your best to make sure their experience is great.
· Tasty N Sons [Official site]
· All Previous Tasty Coverage [Eater PDX]
· All Previous Gatekeepers Coverage [Eater PDX]