Rum Club's Mike Shea on One Year at the Bartender Fave

Share All sharing options for: Rum Club's Mike Shea on One Year at the Bartender Fave 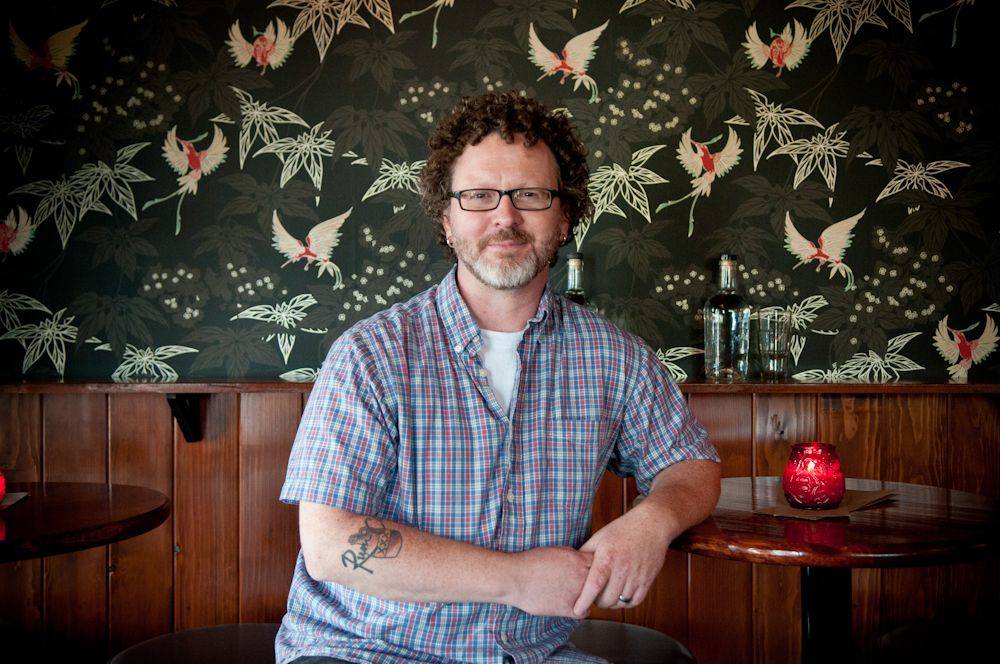 The eastside's swank Rum Club may have first been known as the "sister bar" to neighboring restaurant Beaker & Flask, but in the year since its opening, Rum Club has come into its own as a must-visit, cocktail-lover's destination. And co-owner Mike Shea's devotion to the project (he owns the spot along with Beaker's Kevin Ludwig) is obvious with just a glance at his arm, which sports a tattoo of the bar's logo. "I was in here doing all the varnishing, drinking tequila three days before we opened," Shea says. "And I had put so much blood, sweat, and tears into opening the business, I said screw it, I'm going to Sea Tramp at 1:30 in the morning and got a tattoo." On the spot's first-year anniversary, Shea talked to Eater about Rum Club's Pittsburgh roots, its industry cred, and the "democratic" nature of bar ownership.

How long had you been talking about this concept, and in those early conversations, how were you defining it as different than Beaker & Flask?
We signed the lease in July of 2010, and we had planned very soon after that. For some reason, we got stalled and really didn't start construction until January 2011. ... Kevin had wanted to do this because Beaker never really turned out to be the thing... it ended up being more of a restaurant than a bar. He and I go way back — high school, we moved here together in 1993 [from Pittsburgh, PA] — and for us, we really liked the space, the funny little triangle space with low ceilings. And I thought it'd be pretty awesome to have a little eight-foot ceiling bar with a wood ceiling. My previous job was at Doug Fir, as the bar manager in the music venue. I'd get off at 12:30a.m., one o'clock, and that point there were not that many places where you could get a good cocktail after work. So, that was sort of the idea: having a place that was open until two in the morning where other industry people getting off work can go drink.

And Rum Club is definitely known as a bartender's hangout. So, that was part of the original concept, to be industry-friendly.
This was the place where I always wanted to be. You can come in at 10p.m. to 2 in the morning, and be like, "I want a Mai Tai. I worked hard all night," and not get any attitude about it. That's basically the focus: on the service, the availability of great drinks, and having stuff that we like to drink.

Which is, apparently rum.
Rum Club was a working title that stuck. And the more we said "Rum Club" as the working title, it just started to resonate, and was one of those funny things. Kevin's always been into rum; me being a bourbon and whiskey drinker in my 20s, I started sliding away from that and finding out how interesting rum was and how versatile it can be in cocktails. It became something really interesting with the bar, to show people — don't get me wrong, I love a good tiki drink — that rum can be something so much more than that. It fit the vibe of the room. I was always thinking this sort of LA-ish, or even Pittsburgh, bar with a low-ceilinged room, darkroom-kind of bar. I find it hard to quantify: it was a working title that sort of resonated... and resonated... and then I can't think of it being anything else.

Tell me about the opening. Any major catastrophes?
We did a soft opening on the 18th, Monday night, and we went right from there. And it was crushed. The opening was pretty crazy. I remember looking up at one point that evening — I work in the point of the bar, which is the front well — and I'm looking up, it was three [people] deep at the bar and everyone's staring at me. And I just stood back for a second and went, "All right, I'm obviously screwed. I'm going to do all I can, smile, and tell everyone to have a good time." And that was it. [Laughs] I just remember it being a crazy, crazy, crazy day and at one point, looking up and going, "Yep. All right, what are you going to do."

Oh and there was one major gaffe, come to think of it, for opening night — we didn't have phones. So, we had no credit card [machines]. We kept sending people over to the Slammer to get cash.

Were there any changes/shifts you made after the opening?
Food has always been something we did a little bit — we had to sort of break down with food. Ben Bettinger was the original consultant, but we scaled [the food menu] back quite a bit. But I brought on a new chef just recently, Jon Bones Anderson, and we've actually been scaling up the food. So Jon came on in January, and Benny was leaving – it was a very lucky thing for me, Jon wanted to learn about cocktails and had already put in his notice at Le Pigeon. And it kind of fell in my lap. And it's been fantastic, because he and I have really been able to work together on what we're doing with the food. It's been interesting in that some things we thought might go over well — we tried doing some terrines and high-concept stuff — doesn't really tend to go over here with the crowd. It's a different crowd than Beaker in a way, people coming in here because it's a bar. And I think that food was maybe more unapproachable. So, we switched it up to... trying to hit some heartier food items but mostly cocktail food.

So for non-industry folk who aren't in here at one in the morning, what's the crowd like? And how does it differ from the happy hour crowd, for example?
The one thing that I love the most about my bar is — last night, I stopped in for a minute, and I swear to you, it was all women. I keep on joking, it's like LLRC: Ladies Love Rum Club. There have been nights during the week where there's 30 people in the room and two dudes. Our business just varies so much; sometimes, when you look out at the crowd, it'll be a lot of younger people, and sometimes it'll be older people on their way to dining [nearby]. It's really super-democratic, which makes me really happy.

And the final question, does it feel like it's been a year?
Oh, no. [Laughs] It feels like it's just blown right by. It's gone by really quickly. I can't even believe it's already been a year. Between everything that's happened in the last year, all the ups and downs and everything to prepare... it's really gone by fast.
· Rum Club [Official site]
· All Previous Rum Club Coverage [Eater PDX]