This weekend, more than 700 winos from all over the country gathered on the campus of Linfield College in McMinnville for the 26th Annual International Pinot Noir Celebration. The event, if enjoyed in its entirety, is an expertly planned bender of the highest order: a 48-hour tour of some of the world's best pinot noir backed up by an all-star roster of Northwest chefs. (This year's bill included Gabriel Rucker of Le Pigeon, Jasper Shen of Aviary, Dustin Clark of Wildwood, Jason Franey of Seattle's Canlis, and a handful of others.) Here, now, the weekend's highlights in no particular order:

1. Kyle MacLachlan switcharoo. Actor Kyle MacLachlan (aka Trey MacDougal for the ladies out there) was slated to MC the weekend, but when thunderstorms grounded him in NYC, organizers pivoted. Allen Meadows, wearer of tight T-shirts and the world's foremost authority on Burgundy, jumped in to take his place as the second best beefcake in line for the mic. He pulled off a keynote speech, led the auction at the Grand Dinner and gave two seminars, making him the pleasantly muscular mascot of this year's event.

2. Children sabering Champagne. Saturday's sommelier saber challenge pitted sommeliers against each other to see who could saber the most bottles with the weirdest objects, which included a flat iron and well-worn strappy sandal. RN74 Seattle head sommelier Jeff Lindsay-Thorsen took first place for sabering a bottle with a young child. Turns out watching the twin Westerly boys knock off the top of a bottle of bubbly with a machete — and pour it for a bunch of adults — qualifies as one of life's great pleasures.

3. European pants. Jacques Lardiere, longtime winemaker for Maison Louis Jadot, one of Burgundy's most prominent negociants, wowed crowds with his ability to include every color of the spectrum in each outfit. (That, and his poetic musings about geological "lines of power," the molecular structure that impacts taste, and a wine's path to freedom and expression.) A passionate man with equally passionate pants. 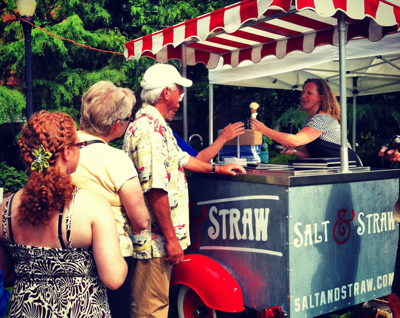 4. The inevitable Salt & Straw line: Turns out no matter where you plant a Salt & Straw cart, an absurd line will automatically form. Through osmosis, guests from every corner of the U.S. flocked to the cart like zombies, forming a 20-minute wait — 30 minutes before the ice cream scoopers even arrived.

5. Gabriel Rucker's Vichyssoise with lobster and foie gras: Dish of the weekend.

6. Clandestine make-out sessions near the quad. This year's theme was University of Pinot. Some saw that as an opportunity to relive the collegeexperience in its entirety.

7. Sommeliers in togas pouring Champagne for hundreds of hungover people at the final brunch. Pics or it didn't happen: 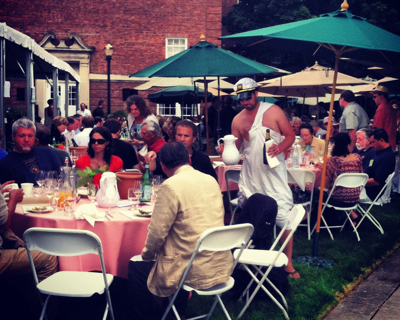