Share All sharing options for: Beaker & Flask's Walton Chows Down at King Burrito 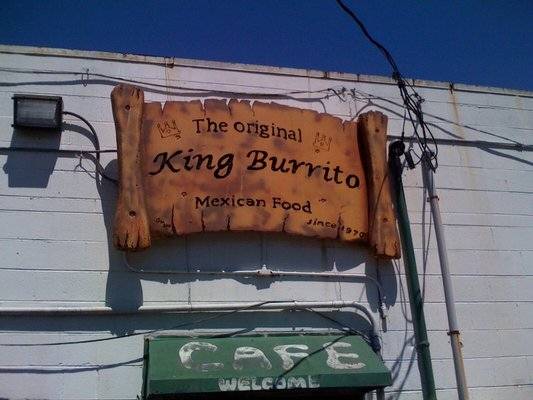 It's been a busy summer for Beaker & Flask's new executive chef Anthony Walton. After the departure of Ben Bettinger, the Wisconsin-ite now leads the show, sharing the stage with barmen Kevin Ludwig and (soon-to-depart) Brandon Wise. From day to day, you may spot Walton scouting the farmers market circuit, spit roasting a pig in the parking lot, or perched in the kitchen at Beaker & Flask, watching over his team while churning out technique-driven comfort food that begs to be washed down with cocktails. Though Beaker's bar has its own late-night industry scene, Walton usually heads up to North Portland for a post-work bite: to King Burrito.

It's usually past 11p.m. when I get off work, so when I'm thinking about dinner, convenience is key. Luckily, King Burrito is a couple blocks from my house on Lombard Street in North Portland and it has turned into one of my favorite late-night stops after a long shift. I usually order the namesake "King Burrito" with beans, steak, and their signature avocado sauce, which is insanely delicious. If I need to switch it up, I order the carnitas tacos with the fried-to-order hard shell. The breakfast burrito with chorizo, potatoes, beans, and eggs isn't as heavy as it sounds, and ! Everything here is pretty cheap, there are large portions and service is quick. King Burrito will definitely satisfy any late-night burrito cravings.