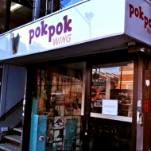 FYI for Pok Pok Phat Thai gawkers: Grub Street has the first look at the menu for Andy Ricker's all Pad-Thai restaurant on New York's Lower East Side (which will take over the former Pok Pok Wing space). Among the offerings on the six-item menu: a vegan-friendly version of Phat Thai. [GSNY]