Welcome to One Year In, a feature in which Eater Vegas sits down for a chat with the chefs and owners of restaurants celebrating their one-year anniversary. 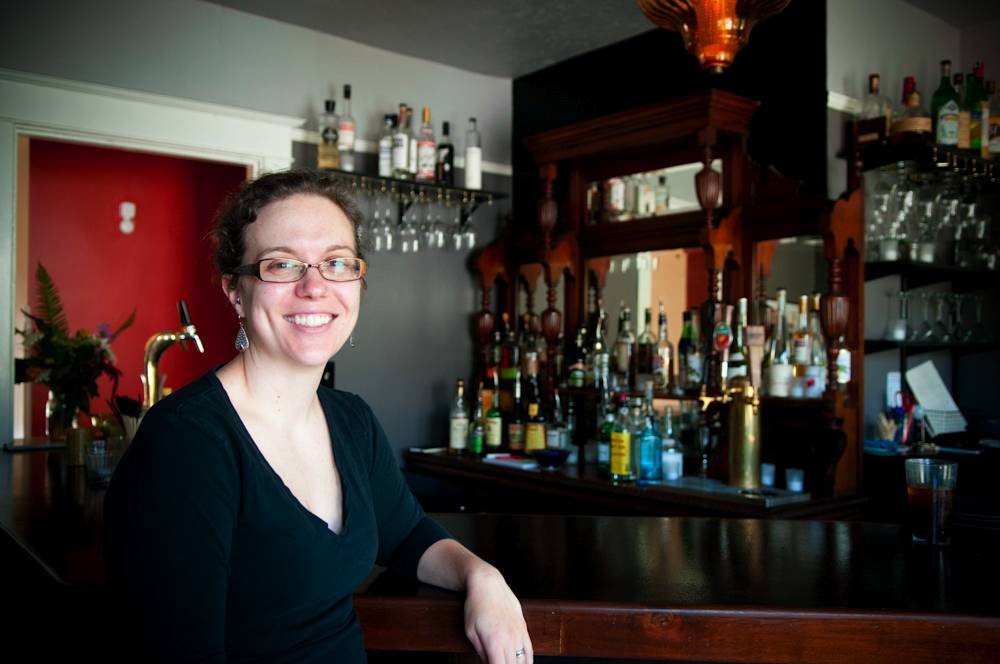 After chef Erin McBride graduated from the Culinary Institute of America in Hyde Park and completed an intensive UCSC organic farming apprenticeship, she applied to work at just one restaurant — Higgins, where she "fortunately, got the job." After seven years on the Higgins line, the last four as pastry chef, and side stints at Lincoln and Culinary Artistry, McBride partnered with longtime cohorts Jeremy Adams and Andrea Pastor of Cellar Door Roasters, and together, the trio capped their popular SE 11th Avenue coffeehouse with a tiny, quaint small plates spot dubbed 2nd Story, which quietly celebrated its one year anniversary on August 12.

Eater bellied up to 2nd Story's (homemade) bar with McBride and got the dish on first year nuances, like how to apply barn-raising principles to a rather impromptu restaurant opening, reconciling cash-in-the-walls dreams with ReStore budgets, thinking like a farm wife, and learning to laugh when the oven won't unlock.

How did 2nd Story come to be?
It just kind of... did. Andrea and Jeremy and I had been trying to work together, and we'd looked at different spaces around town, in Woodstock, in the Pearl, but none of them seemed to work. And then the coffeeshop's landlord called us and said the space upstairs was for rent, so we decided to do it.

What was the buildout like?
We did all of it ourselves. A friend built the bench in the other room, but other than that, we did it all. Jeremy built the whole bar — we got this mid-1800s hutch off Craigslist and oddly enough it was the perfect size to fit right there, so he took the bottom part and made the front of the bar, and the top became the bar — it fits perfectly on that lowboy like it was meant to happen. It was a lot of late nights and painting. We had lots of gung ho people — [sous chef] Ian [Wilson]'s girlfriend Kristen [Howe] did the menus, Ian painted the front door the week before we opened, there were a lot of people helping out.

Kind of like a barn raising.
Yeah, friends were always coming and going. We had a painting party to get the place primed, which involved beer and a whole bunch of rollers. And a lot of friends I've worked with over the years came in and helped get the food ready for opening parties and things like that.

A lot of restaurants have huge buildout budgets but you managed it on a shoestring, how'd you do it? Free labor's a big help, obviously.
Yes, free labor! And I think it's a matter of "what do I think I need?" versus "what do I really need?," then, "what can we do in the meantime?" We've been waiting to buy things — we bought a lowboy for the kitchen when we got the cash, we bought a mixer when we got the cash. And you have to figure things out on your own. If stuff breaks, we don't really have anyone to fix it, we figure it out. Or we go down to the ReStore and buy a new $50 stove. That one's lasted for something like seven months now! [Points in direction of kitchen.] There are creative ways around everything.

This is a very cool vintage space, did you find anything interesting in the walls?
We kept hoping to find money. Jeremy, every time he punches a hole in the wall, starts looking for cash.

What are your most significant restaurant opening hindsights? Any good lessons for someone else thinking about doing this?
I think the biggest thing comes down to budget. I look at it from the point of view of a cook — most of us, especially in this town, don't make a ton of money, so it comes down to knowing your limitations and finding creative ways around them. We have an old home freezer, and an old home fridge in the back that we call the walk in. Our goal is not to throw anything away, especially after the farming part of my background — we know how to completely utilize all our ingredients and not waste anything. Whether it's pickling things, freezing, finding ways to make jam — you have to think like a farmwife. And you have to have a sense of humor because shit's going to go wrong. Like, I can't open my oven downstairs today. It won't unlock. We cleaned it last night, and now it won't unlock, so we were all down there poking at it, but the electronic board won't work, so you know, you just have to laugh at it and figure it out.

This has always been a serious restaurant, but I think that initially, most people thought it was a bar, how did you bridge that?
We're tiny compared to most restaurants, so I think maybe people don't expect the quality of food to be what it is for the price. We haven't thrown money at advertising, we don't have publicists, it's just word of mouth. We do have a lot of people who come up for a drink, then they are like, let's get an appetizer, and then they come back in for dinner, so I think that's what's bridging the gap. Our biggest goal is keeping up quality across the board and building slowly through word of mouth. Hopefully that works.

How has your menu evolved from the early days?
As I realized people would order more entrée-ey things, we expanded the menu a little bit, because in the beginning, people wouldn't really order those things. I've been trying to have a seafood, a pork, and a steak option, and the menu is very vegetarian-friendly because people really need to eat more vegetables. And as we've gotten more hands-on help, it's allowed us to do more stuff I didn't have time to do before, like make our own pancetta and focaccia. Next week we're taking the baked pasta off the menu and moving to gnocchi, and then everything on the menu will be made in-house. We're really excited about that.

Why is your caramel pudding so good?
Because I put salt in it. And I use this really awesome vanilla extract too, from Singing Dog down in Eugene, it's delicious. I really love caramel, I think you can tell.

The Portland Tribune recently named you Best Date Spot in Portland. Have you ever witnessed any particularly riveting fights, bad date behavior or public displays of affection?
For a while I was not working the front of the house, so I'm pretty sure [former bar manager] Brandy [Graves] saw some stuff that I didn't. We've definitely had people get in fights, and you're like, "awkward" — I think that's actually what Brandy would say tableside, then walk away. Sometimes people come in really grumpy at each other, then they get a little food and a drink in them and they have a really good time. Or, they can be having a great time and then all of a sudden something flips. The funny part is you can see them leave, and usually the woman will be way ahead of the guy, stalking across the street, and we're all like, "oh buddy, now you did it!" But we haven't had too many of those kinds of catastrophes. Usually it's more like, oh, the element in the oven just exploded, or, oh look, the bar's flooding.

Does it feel like it's been a year?
Yes and no. It's been like a blink of an eye, but at the same time, it feels like we've been doing this for a really long time. It's amazing how much easier it is, now that I know how to work in the kitchens, how much more efficient everything is, and now that we have some kind of clue about how to deal with everything. And I'm not afraid to talk to people anymore, like I was when we opened — that was my biggest fear. Brandy had to teach me how to work the front of the house because I'd never done it. I still hate opening bottles of wine tableside. I always get the really stubborn ones.

Any exciting plans for your second year, like maybe brunch?
We hope so! Our one year party will be on Halloween night, we're going to do a big spread and have cocktails on dry ice, I'm so excited. We're just focusing on getting through the busy season and the end of the year, then we'd love to open a fifth night, and do brunch. Jeremy got me a little wafflemaker he found somewhere, so we're going to do waffles, and things with poached eggs, and old-timey, delicious brunch pastries like coffeecake and brioche and sticky buns.

And caramel pudding?
Yes, with little cookies you can dip in it.
· 2nd Story [Official site]
· All Previous 2nd Story Coverage [Eater PDX]