A Royal Salute to Beerman Chris Ensign (aka 'King C')

Share All sharing options for: A Royal Salute to Beerman Chris Ensign (aka 'King C') 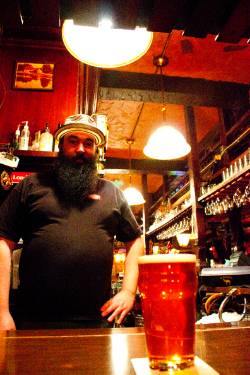 It's a challenge to choose just one bartender or server to highlight for their work, so instead of playing favorites, I imagined, if all of them were thrown in a ring together, who would come out on top? The answer was easy — the only one who has earned the moniker of "King" (that's King C. to you). You may recognize Chris Ensign from pushing beers at the Lucky Lab brewpub back in the day, or perhaps his stint as a founding bartender at the Green Dragon, when publican Jim Parker culled the best beertenders from around town. Or maybe more recently he has poured you a pint at APEX or Horse Brass Pub. Regardless of where you have seen this hulking bearded man (usually wearing a funny hat), and thought, "Damn, I don't want to get on his bad side," after ordering a pint of presumably locally made ale, King C.'s always friendly demeanor wins you over.

I have heard the King's voice compared to that of lovable Winnie the Pooh character Eeyore the donkey, and it's an apt comparison meant in the most affectionate way — remarkable for a man of 40 years of age who has spent most of his life tending to trollops and fools. Don't get me wrong, the King can just as easily crush you like a bug as kill you with kindness. Let's not get him started on babies in bars or that drunk bastard who just doesn't know when to go home. When the King gets angry, you better run — he doesn't need to yell or pound those ham hocks of his upon the bar, to just see his friendly eyes turn to a steely gaze of death will send even the most hardened of bar drunkards scurrying for a pedicab. The King has been serving me beers for more than five years now, and I have never seen him raise his fist for anything more than to pet one of his beloved kittens. Like any good King, Chris rules with an even hand, treating every patron with the respect they probably do not deserve. So think twice before demanding to know when Pliny the Younger is going to be back on tap and respect your Elder! Now let's pause for a moment and give thanks to our King and share in his glory — for any fool can make a drink, but not everyone can take your attitude.
— Ezra Johnson-Greenough, founder of the New School and Portland Beer Week