Share All sharing options for: Ricci of Dot's Cafe Prefers It Plain at Gladstone St. Pizza 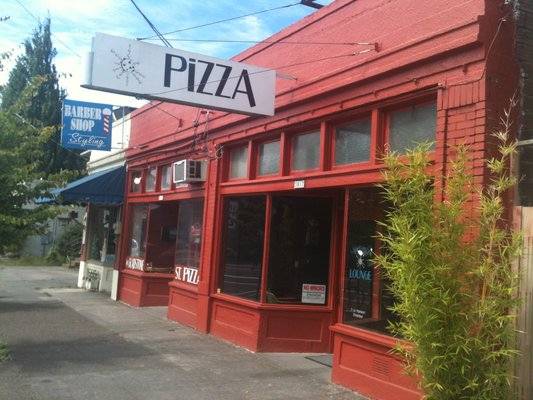 Johnny Ricci, the new owner/chef at the PBR-and-jalepeno-cheddar-fries fueled Dot's Cafe, was raised in Connecticut and moved to Portland in 2000, working at various locations, including four-and-a-half-years at Carlyle. "That's where I really fell in love with the Northwest, its cuisine, and the city of Portland," says Ricci. "My dreams of running my own spot came true when Eli Johnson approached me about the news that Dot's was up for sale." But don't expect too many big changes at the beloved SE Division spot. "I think collectively we really want to keep Dots as true to itself as we can." And according to Ricci, his favorite spot in Portland not only stays true to itself, but also reminds him of a Connecticut fave.

Gladstone Street Pizza Lounge & Cafe is my favorite place in town, by far! Their pizza is New York style, well actually, to be even more specific, New Haven style. As a big guy, I have been known to eat a lot of pizza. However, I have never been able to find a spot that reminds me of my childhood favorite, Village Pizzeria & Grinder shop in Bethel, Conn. The team at Gladstone are the real deal. They have great toppings, an amazingly bright red sauce, and a chewy but not tough dough that bubbles and chars to perfection. I prefer mine "plain" with no extra toppings except chili flakes, garlic, and fresh grated parmesan. Add a cold IPA or two, and some good conversation about the Yankees, Giants, or anything else from back home to that mix, and I'm a happy man.