Welcome to On the Record, a new Eater feature that explores the playlist-making mentality behind some of Portland's most musically inclined bars and restaurants. First up: Bunk's Tommy Habetz hooks us up with his Spotify playlist. 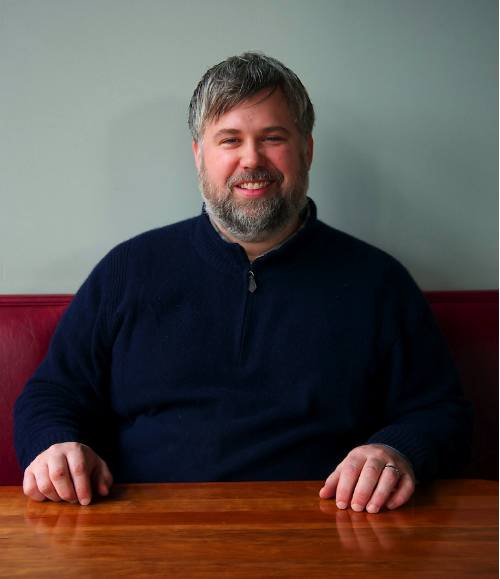 Tommy Habetz has proved himself to be Portland's premier purveyor of food and music, and there are a few good reasons why. One is that, along with partner Nick Wood, he started Bunk Sandwiches as a seasoned vet of New York City's fanciest kitchens, hence the legit meatball parmigiano heros and bacon-egg-and-cheeses. Another reason is that he opened sister joint Bunk Bar — which moonlights as a live music venue — with a fanatical penchant for collecting records and immersing himself in the city's music scene. Eater sat down with Habetz to discuss how his two biggest obsessions are by no means mutually exclusive — namely how sandwiches are best served with Slint and Sonic Youth.

Who do you turn to for playlists in the dining room? Do you do it yourself or do you employ a service like Muzak?
No, we play our own music. We originally had a turntable vinyl at the Bunk on Morrison, and I even put a down payment on a turntable boom box that I never was able to get. I kind of did this all at once and it just didn't make sense because [Bunk Bar and Bunk Sandwiches] are really busy places, plus you have to hire this other guy to spin the records.

How long was the initial record-spinning going on?
For a while. I'm not at the sandwich shop on Morrison anymore, but when I was there I would make sandwiches and just turn around and play records.

Were they "dining room chill vibes" kind of records?
No, it was whatever we wanted to play. I'll play almost anything, really, and that's kind of the fun thing about Bunk. It's just a sandwich shop, and we can get away with it. Also, I worked for so long in fine dining where I was working for other people. I love all kinds of music, and I love that being in my place we can play whatever we want. I get to play stuff from when I was growing up: Sonic Youth, Slint, Pavement, Guided By Voices, and all that '90s kind of stuff. Thurston Moore's actually been in a few times to Bunk, so it's fun to play records while he's hanging out there.

How does the food at Bunk inform what's being played, or vice versa?
In most high-end French kitchens, there's no music at all. There's no talking, you know. It's really very quiet and sort of this very serious environment. Our food is a lot less serious. We take what we do seriously, but we have a good time doing it. We're not uptight about it. In the kitchen, anything goes, and mostly that means metal and gangster rap.

So people go hard in the kitchen?
Definitely. It is hard work, and it's very demanding and there's a lot of pressure, so I think having music is a big outlet for anybody working in a kitchen. And there's definitely have been people cultivating this aura of the "cook as the renegade." I really kind of blame Anthony Bourdain for that. When I started cooking, Anthony Bourdain was actually a chef in New York and he wrote mysteries, but then he came out with Kitchen Confidential and that kind of changed things. Since then, there are a lot of young kids coming through kitchens that romanticize the lifestyle. Because of that, I think it attracts people who are sort of on the fringe, and along with that they bring the music that they listen to and share with others. I think it's awesome. I've learned a lot about music from people I've worked with, and I've shared what I know about music with people I work with. It's a unique environment. I don't know of a lot of other work environments where you get to listen to so much music.

When you enter a restaurant, are you hyper-aware of what they're playing?
Yeah, I definitely am, but that's me. I'm hyper-aware of every aspect of what's going on in a restaurant. That's from being a chef and an owner. People may find that funny considering Bunk, because at Bunk we're slackers in some way. But it's a conscious choice. We try not to be too fastidious or too overly analytical of how the environment is. We let it be more organic, and that's how we go about doing what we do. It's important to me that the food is as great as it can be and makes people happy, but as far as the environment goes we're a little looser at Bunk. Going into most places, I'm aware of them being overly fastidious about how they handle it. Say you go into Paley's Place, one of the best restaurants in town. It's a great place. But you know, there's a lot of details. The music's very subtle, very non-confrontational. I like it when you go into loud, smoky, buzzing places. I like all of it, but I'm aware of all of it. I really appreciate all of the imperfections more than the perfections.

Is there any particular genre or album you'll hear in a restaurant that makes you want to leave?
I get irked by stuff that I consider to be way, way overplayed. I feel like when somebody puts it on it shows a kind of carelessness, like they don't care about music or anything like that. As much as I hate to say it, the Buena Vista Social Club record. That record was such a joke in New York in the '90s. It was on every fucking stereo in the whole city. It's a great record and I feel bad about it, but it's pretty hard to hear. What else? The Garden State soundtrack is way overplayed. There's been an '80s resurgence, but I feel like that was more two or three years ago, when you'd walk into a place and they'd be playing Air Supply or some other bad '80s music. I think the main annoyance for me is when there's no thought going into it.

What kind of feedback do you get from diners at Bunk?
We've gotten criticism at times, people calling us "hipster-ish," which I don't get. We're just playing the music we want to play. I think when people use the word "hipster" they use it in a negative way, and I don't see how what we're doing is negative or pretentious. When people use that word, it's completely non-committal, saying something negative for the sole purpose of saying something negative. Calling something "hipster" is totally half-assed negative. It doesn't tell you anything.

On the positive side, I've had these moments at Bunk Sandwiches where in the morning I'll be the first one in, getting everything set up for the day, and the sun will be coming through the window and I'll put on Side Two of Goat's Head Soup by the Rolling Stones, a song like "Winter" or something, when it's a sunny day in the winter. It's a magical moment where the music's perfect and your mood is perfect and the coffee's hot. To me, that's what it's all about. Somebody posted on our Facebook that they had had that moment at Bunk, where they were eating on a hot summer day listening to "Illmatic" by Nas. And I totally understood that experience, 'cause we're having that experience, too. I want to share my love of music with people because they're coming in for my love of food. One thing I've realized is that you really have to love what you do in order for other people to love what you do. We're just doing stuff that we love, stuff that we didn't really feel was represented in Portland. It's the same thing with music. I want to share what I love about music, which is all over the place. I love it when there's that connection.