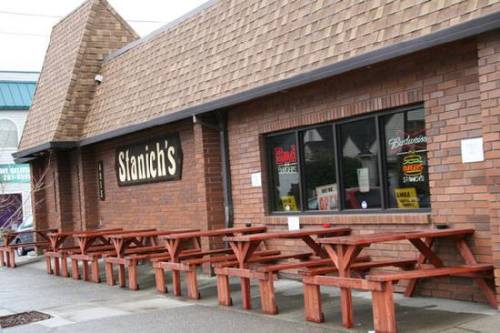 As professional PDX eaters go, few in town have eaten out more than Feast Portland co-founder Mike Thelin. Not only has he planned food events in Austin and elsewhere for thousands of hungry masses (including the last two Eater Awards galas in NYC) the one-time Willamette Week food critic, then Portland Monthly restaurant columnist, and now Cooking Channel contributor to the show Unique Eats, Mike has been traveling around the city and the country on the editorial dime for a half decade. Thelin eats well, but when not on the official beat, the Scappoose, OR native's pick ain't so fancy.

For me, a burger is the ultimate hideaway comfort food, so when that's what I'm craving, I go to Stanich's. My burger philosophy is pretty clear-cut. I'm not going to wait in line for it, it won't find any company with a $12 cocktail, and designer ketchup or artisan pickles are out of the question. Don't get me wrong, I'm a frequent champion of the cheffed-up burger-like-thing when appropriate [one of Thelin's first assignments for WW was dissecting a $28 burger], but to me a proper burger craving is only sated with what I learned in childhood. A burger [requires] a soft and seeded bun, a thin patty (or two), some type of melty cheese, minimal vegetables for texture, and that's about it. Once in a while, I require a couple slices of crispy bacon as a nice hood ornament. When bacon is needed, no place can top "The George" burger at Stanich's, one of Portland's old-school institutions. Go on a Friday night and fight off the little league-ers and regulars who have been coming for 50 years. I've been going for nearly 20 years, when a high school girlfriend took me here on a date. One word of caution: the fries are crap. Sorry Stanich's. I love you, but it's true.