Share All sharing options for: On Artwork Swiped from Lincoln's Bathroom Walls 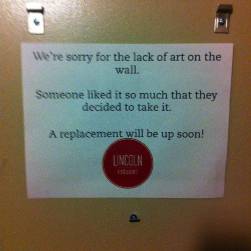 Artwork stolen from bathroom walls is a surprisingly common occurrence — just ask former Shit People Steal victims at Toro Bravo and Acadia New Orleans Bistro — and now, add N. Williams' Lincoln to the list. According to co-owner David Welch, an original pastel sketch by Portland artist/friend Alex Hirsch was pilfered after a recent Tuesday-evening service. The piece, one of a three-part series, depicts an abstract field with Old Testament scripture.

"There were two of them in our north bathroom, and just one painting in the south bathroom, the one that they stole. And someone must have really wanted it, because it wasn't just hanging on a normal picture frame — it was hanging on these hook locks, so someone had to really do everything they could to get it. It was really interesting. I think someone can in on Tuesday, and just before they left, found a way to get it off the wall and then walked out with it. It's just one of the strangest things that someone would take if off a restaurant bathroom wall. It's kind of a bummer we don't have it any longer because it was made specifically for us, and it was a very unique piece for us — and has been hanging since we first opened."

According to Welch, the restaurant will reward its return with food: "I'm sure we could muster up a few gift certificates for Sunshine and Lincoln if it happens to find its way back." Restaurateurs: Have a story about getting your shit stolen? Holler.
· All Previous Shit People Steal Coverage [Eater PDX]