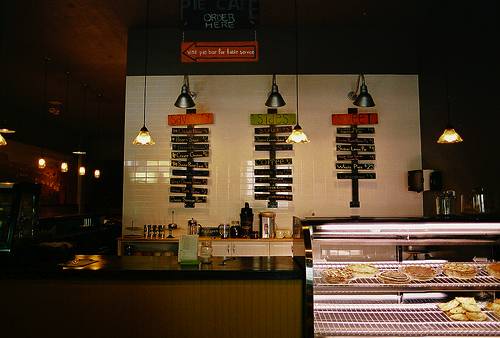 Image of Pacific Pie by EPDX

Donald Kotler — celebrating five years at his neighborhood restaurant Toast and one year at Yolk, his bright yellow food cart on Woodstock — is a native of Long Island, and since moving to Portland in 1993, he's worked many of Portland's favorite rooms, including bartending at the famed Caribou Club in Old Town, managing the bar at Southpark, and serving at Giorgio's. "I've always loved food and working in bars and restaurants," says Kotler. "Even as a kid I knew that was what I wanted to do." As a kid, Kotler worked every Saturday at his grandfather's hardware store in Glendale, Queens, and "we'd always hit the neighborhood bakeries for the best eats." So where does Kotler hit in Portland for pastries? Pacific Pie Company is his bakery of choice, especially for its savory sausage rolls.

I love Pacific Pie Co. I found them because I love to bake and you always have to sample what other people are making. So I definitely had to try them out. They have delicious pies of all kinds, but I am addicted to their sausage roll. It is savory, spicy, and in an amazing flaky crust — reminds me of the great crusty rolls and hand pies I had as a kid. At $4, their sausage roll is a great deal and you can enjoy it with one of their beers on tap. I run into Pacific Pie Co. when I'm out doing errands. I can stop in with my kids for a bite or I can grab a sausage roll and eat it on the go. And this season they have been selling the sausage rolls at the Woodstock Farmers Market where I buy produce every Sunday. Once you've had a really good sausage roll — you're a fan for life.