As the weather grows cooler, Eater will be continually checking in on the restaurants named to our Most Anticipated Fall Openings list. First up: Ava Genes, now slated to open the first week of November. 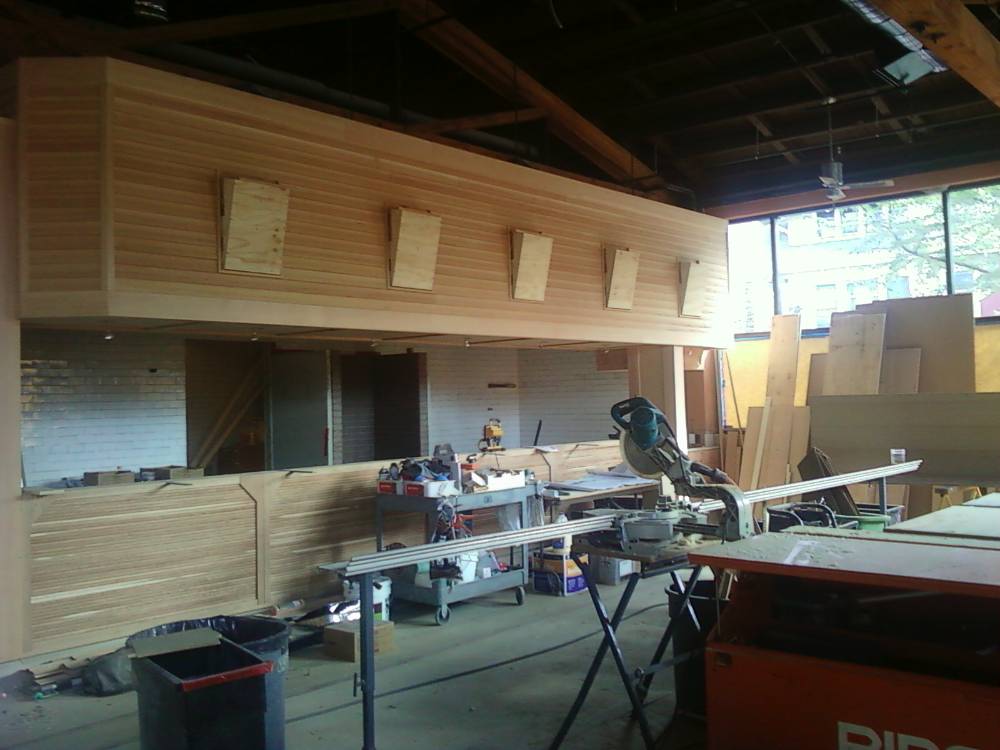 Inside Ava Genes, by EPDX

SE Division's Ava Genes will mark the second restaurant opening by Stumptown founder Duane Sorenson, who took over the space neighboring his longtime roastery earlier this year. The spot, previously home to David Machado's Lauro Kitchen, will soon be reborn into a 75-seat restaurant that borrows from Sorenson's favorite Italian-American spots — including Franny's and Roberta's in Brooklyn, Lupa and Torrisi Italian Specialties in New York City. With its new projected opening date pushed back two weeks to the first week of November, here are a half-dozen new details about the project, courtesy Sorenson himself.

1) Sorenson's had his eye on an Italian restaurant for several years now, preceding the much-reported plans for the NYC chefs behind Frankies Spuntino to open a restaurant in the current Woodsman Tavern space. "Even before Frankies, Tommy Habetz and I were talking about opening an Italian restaurant together," Sorenson says. "And at that time, he had the opportunity to get the spot down on Morrison, and shifted gears and opened up Bunk."

2) As previously reported, chef Joshua McFadden (an alum of Franny's, Lupa, and the Woodsman Tavern) will helm the kitchen. "[The menu] is inspired by Roman cuisine, if anything, using local ingredients, seasonal ingredients," Sorenson says. "But also looking out and seeing where the best pasta is, where the best olive oil is, who has the best balsamic. And that's something Joshua is really talented and passionate about." And McFadden has had a hell of a summer. According to Sorenson, McFadden staged at restaurants on both coasts to gather inspiration for the Ava Genes menu, an itinerary that's included stints at NYC's Del Posto, Il Buco, and Momofuku Ssam Bar; in San Francisco, McFadden spent time in the kitchens of State Bird Provisions, Flour + Water, and Cotogna.

3) Sorenson and Stumptown operations director Yasuaki Saito are mum on menu details, with specific dishes a work-in-progress. But "it's not necessarily going to be a top-to-bottom menu, like a lot of places have, where you're dictating the flow of the guest," Saito says. "There will be headers for different sections, but... we want it to be a very convivial, shared-type atmosphere." Expect six different sections with a shared focus on both fresh and dried pastas; a grill and rotisserie will also come into play. And a multi-course tasting menu will be available at the chef's counter, with McFadden handing plates across the counter to guests.

4) Perhaps unsurprisingly given its Stumptown pedigree, the restaurant will employ a full-time barista to handle coffee orders — "which is not that common," Sorenson says. "It's usually whoever's working the floor [who] goes back and makes an espresso. So, to continue with the focus that we're putting into our hospitality, our wine list, our cocktail program, and our food program, I want the same energy put into our coffee program. So, we'll have a full-time barista just focusing on the coffee, just like we would if it was someone on the grill or someone on the pasta station."

5) The interior will look completely different from its Lauro Kitchen days, with details ranging from Terrazzo flooring to cracked subway tiles on the walls to a Persian-tented hallway toward the bathrooms. "We're really excited, from the floor to the soap dispenser in the bathroom — we just had them cast and molded," Sorenson says. "We had an example of an idea and found somebody in town to cast these beautiful soap dispensers for the bathroom. The detail and excitement behind that is awesome. I'm excited for people to go and wash their hands."

6) Sorenson hopes to build a sense of community with the opening of Ava Genes — not just between the restaurant and the Division/Clinton neighborhood, but also amongst the local restaurant industry. "We're excited to feed Portland chefs," Sorenson says. "We've already talked about, one night a month, [having] a certain restaurant invite their staff after they close, and feeding them [at Ava Genes]. Give them a staff dinner but have us cook for them. We're excited to wait on and serve folks who are front-of-the-house at other restaurants in town, places that we love."
· All Previous Ava Genes Coverage [Eater PDX]
· All Previous Duane Sorenson Coverage [Eater PDX]