Wafu's Trent Pierce on a Year of Ramen and Opening Roe

Share All sharing options for: Wafu's Trent Pierce on a Year of Ramen and Opening Roe 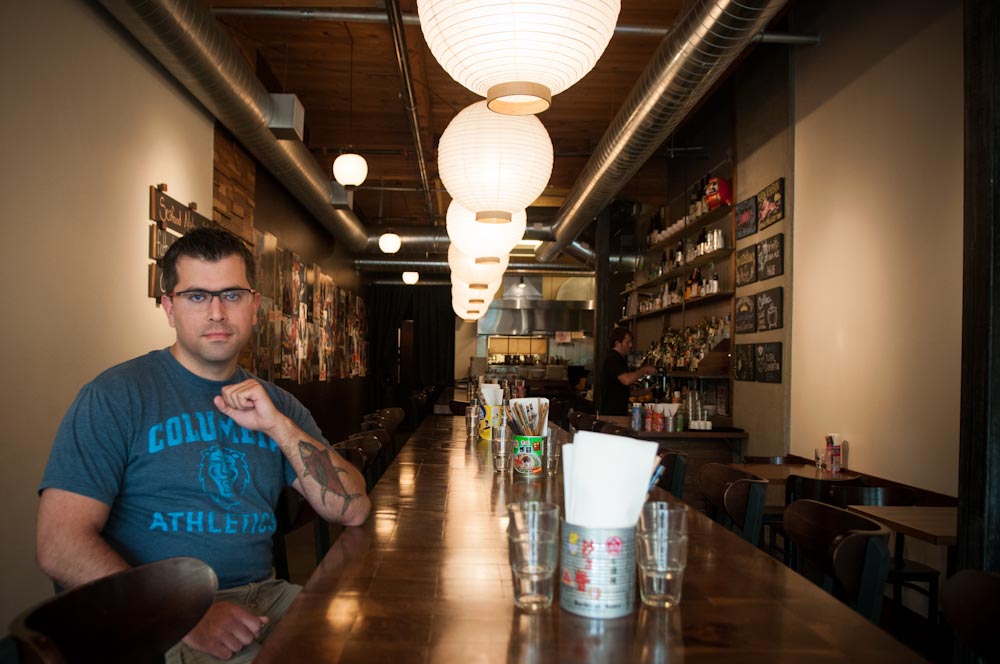 Born to third-generation restaurateurs, Trent Pierce was more interested in sports than the family business until age 19, when a track injury and a reading of Marco Pierre White's White Heat propelled him into his first restaurant job, at McMenamins' Black Rabbit. After stints at Belly Timber, Yakuza, Foster Burger, and Sel Gris, Pierce finally found an outlet for his passion for seafood at short-lived but acclaimed Fin, which shuttered unexpectedly last Valentine's Day after only six months, leading him to open Japanese small-plates hotspot Wafu on September 2, 2011. Just last month, he transformed Wafu's back room into sleek 26-spot seafood fine dining destination, Roe, where he happily puts in 18-hour prep days — yet managed to spare a few minutes for Eater to talk about the Fin-to-Wafu (and Roe) transition, being true to your ramen visions, the make-or-break value of a patio, and vital lessons learned when one opens three restaurants in three years.

When you shuttered Fin last year, did you plan on opening Wafu?
No. Wafu wasn't even an idea when we closed Fin. The idea was to reopen another seafood restaurant, and it was by chance that I got the investment. The investor had eaten at Fin once and was going to come back, but at that point we were booked out and he couldn't. When he heard we'd closed, he called me up to talk and we formed a relationship. I took a couple of trips down to LA where he lives, to eat with him and discuss ideas, and while the first idea was a continuation of Fin, we were worried about how fine dining restaurants seemed to be closing all the time. So we wanted to do something a little more casual, without spending a lot of money. We wanted to do something sushi-bar style — basically how we're doing Roe in the back. Then we were eating at a ramen shop down in LA one day — where ramen is a whole different world, everybody's all about ramen there — and he was like, 'Why don't we do this?' I was very interested, so we formulated the concept, and this is what came of it.

What was the transition like, going from Fin to more casual Wafu?
Really hard. It's really, really different going from fine dining to casual dining and creating dishes that translate well. You can see the juxtaposition even moreso now with Roe in the back, and the difference between how we cook and work in the back and how we cook and work in the front. The front's a lot sweatier, it's hard and fast, it's very physical work, while the back is a lot more tedious and everything is more delicate. There are only two of us doing it, just me and Patrick [Schultz]. So, we go to the coast Tuesday, we come in, we do a little short prep day, we do an 18-hour prep push on Wednesday, Thursdays are an 18-hour day and then things calm down to a 10 to 12 hour day on Friday and Saturday. It's very intricate food and there's a lot that needs to be done, and we're prepping from scratch each week. It's a totally different style — we don't have the manpower to do what we do at Roe in the front seven days a week. It just wouldn't be possible.

How did you develop the Wafu menu? What are your influences?
A lot of it is born out of dishes we did at Fin. We always had a vegetable dish at Fin, and that's where the miso-creamed kale was actually invented. A lot of it came out of trips down to LA, a lot of it was what [chef de cuisine] Jane [Hashimawari] grew up eating — there's a curry dish that is Jane's family recipe, that we do in the wintertime. Our influences are everywhere.

How was the reception for Wafu?
We had a great reception. I think any restaurant, regardless of what it is, if you pick an ethnicity, you're fighting the generalizations of what that cuisine is — so that's always a hill to overcome. People have this idea of what Japanese food is and we're not doing what anybody's idea of Japanese food is, really. So it was interesting when we were met with that. At Wafu, we're constantly trying to pick apart the customer and figure out what they are looking for. But when someone comes into Roe, what they are looking for isn't anything other than a really nice dining experience, their expectation isn't, 'I know Japanese food and this is how it should taste.' Their expectation is, 'What are they going to make for us and how is this preparation going to be and how is it going to work?' That's the main difference, and I didn't think about that when we first started.

Fin fans were really excited for your next project, Fin closed so abruptly and everyone was waiting for you to reincarnate, did you feel the pressure?
I didn't feel pressure so much as I was just worried that this wasn't going to be what they were looking for. I do think people were disappointed that we weren't doing the seafood, because I think that's what everybody wanted. But no, I didn't feel any pressure to appease the Fin fans in that way, because I felt like the plan was always to open this place and then open Fin again, and Wafu was a stepping stone to that.

So is Roe Fin 2.0?
It's more than that. Just over the last year doing this concept, I've really matured as a cook. I think Fin was almost more of a rebellious way to cook, going against the norms, and Roe is more of a mature, I've-figured-out-exactly-what-my-style-is way of cooking. Roe is 100 percent what I want to be cooking and doing. But I also really enjoy the ability to come to the front and say, 'Let's do rice cakes with kimchi and pork belly,' then walk to the back and be like, 'We're going to confit butterfish and shave black truffles over it.'

What have some of your biggest challenges been in this first year?
The construction next door was an immediate impact on our business — that was actually the first challenge we noticed, literally not having a sidewalk. We don't have the greatest storefront in terms of visibility, so it was challenging trying to get people to figure out we were here. Summer, and the nice weather, is probably the biggest challenge for this space. We didn't have any outdoor seating when we first started, and if you don't have a patio in the summertime, you're down. You just are. But as soon as we put the patio up, all of a sudden, there was a lot more business.

How have the concept and menu evolved since you opened?
When we first started, we were more ramen bar style — where it's pick your seasoning, pick what you want on there — and we changed that. I decided around February that we should just create the bowl of ramen that we want, instead of trying to be everything to everyone. We wanted to be able to highlight the other things on the menu — the ramen was kind of going to be our burger, and everything else is what we really want to showcase — so we changed the menu format to give us more creativity, and not be pigeonholed into having set dishes. We've been constantly changing the ramen, always tweaking it — in big leaps when we first started, small tweaks at this point — but when we first opened, we had a completely different broth than we do now. That was all stuff we were still trying to figure out when we first opened. We had a product we liked, but we also knew it could be better, so it was constantly changing.

Does it feel like it's been a year?
Definitely. The first year is always long for everybody, you have to put in a lot of hours that first year. But it also feels like it's gone by really fast.

Now that you've opened three restaurants in three years and are pretty much a pro at it, do you have any poignant opening tips?
You always need a week more than you think you do in the kitchen (prior to opening). And I would say that in that first year you've got to stick to your guns, because there are a lot of people telling you a lot of different things. You've got to be really true to your visions and things will shake out over time.
· Wafu [Official site]
· All Previous Wafu Coverage [Eater PDX]