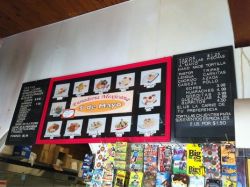 Scott Snyder grew up in California, but much of his family, including his great grandparents, have Israeli roots, having emigrated there from Russia in the mid 1800s. Their visits and the food he grew up eating — lamb, goat, birds and kosher charcuterie — are just part of the inspiration for east Portland's soon-to-open Levant. At Levant, the former Wildwood cook will offer some twists on traditional Arabesque-French fare, bringing the cuisine to Portlanders in an affordable and approachable way. That's something he has already found at one of his favorite Southeast neighborhood haunts, Panaderia Mexicana Cinco de Mayo.

At the trisection of SE 32nd Avenue, Tacoma Street. and Johnson Creek Boulevard is Panaderia Mexicana Cinco de Mayo. It is a small hole in the wall, bakery, and marketplace that happens to have a spectacular taqueria. They are renowned for their baked goods, as the lines of people stocking up fortheir morning pastries will attest. But in my opinion it is as taqueria that they truly shine. My favorite dishes are their tripa, cabeza, and chivio tacos. They also have some of the most astounding tortas gigantes in the Portland area, in no small part due to their house made telera rolls. They have many other specialties, as in outstanding menudo, tacos durados, huraches, and gorditas. I happened upon this gem a few years ago while searching for the best gorditas in the Portland area. By dumb luck and happenstance when I relocated to Milwaukie this fine establishment became my closest food option.

Project RED, an initiative from recovery organization Alano Club of Portland, provides restaurants, bars, and cafes with Narcan for free