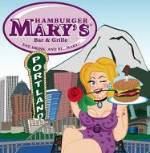 A waitress at Old Town drag bar/burger joint Hamburger Mary's has filed suit against the restaurant, claiming that a manager "sent her pictures of his penis" and suggested "she must have a sexual relationship with the manager to keep her new job." According to a report in WWeek, the lawsuit was filed in Multnomah County Circuit Court on Dec. 27, and the woman is seeking $550,000 in damages. [WWeek]