Firehouse's Busetto Hoofs Up to Mt. Hood for Maple Bars

Share All sharing options for: Firehouse's Busetto Hoofs Up to Mt. Hood for Maple Bars 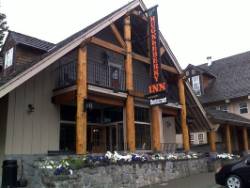 Matthew Busetto has manned the post at Firehouse since opening in 2008. Growing up in the Bay Area at the height of the locavore movement, Busetto gained an early appreciation for seasonal ingredients and simple preparations — something that's evident the moment you walk into his restaurant that's anchored by a wood-fired oven. Night after night, Matthew and his team prepare southern Italian-inspired dishes at their historic North Dekum neighborhood outpost (the old firehouse was built in 1853), but on the rare occasion that he has a few hours to spare, Busetto cruises up to Mt. Hood to satisfy another nostalgic craving — for a gigantic and oh-so sweet maple bar from Huckleberry Inn Cafe.

The Huckleberry Inn Cafe in Mt Hood is home to one of my favorite guilty pleasures — maple bars. The place is a diner really, but I have been known to drive up there when I can (snow or no snow) and grab as many maple bars as possible, then turn right around and deliver them to a few lucky friends and family. Gretchen Glatte (Woodlawn Coffee and Pastry) always gets one, because she's the one that turned me on to the place. The maple bars are enormous, cakey, and almost unbearably sweet. But we all had doughnuts as kids and it's one of those indulgences as an adult that is completely worthwhile and without the usual guilt because it takes you back to those carefree days of childhood. When my family is in tow, my wife and I take pictures of the maple bar next to my son Calvin's head to gauge cranial growth. The rest of the food is basic diner grub. But seriously, go up there now and grab a bar and weak cup of coffee. Immensely gratifying.