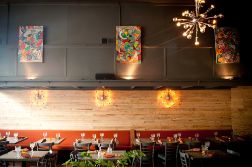 Eugen Bingham was just a child when his family opened a small inn, called "the Slide Inn," in the Sierra Mountains. Flash forward to 2012, when Bingham reopened and modernized the former Il Piatto into the new Slide Inn: Having apprenticed in Germany and cooked in America, Bingham creates a balance between the two cuisines in his newest restaurant, even keeping a garden on site from which he yields swiss chard, arugula, and kale. But when Beingham isn't busy in the kitchen he frequents Celerina's — a small, unassuming Mexican restaurant on SE 82nd Avenue.

I found this place one day while driving down 82nd and decided to stop in for a quick bite. I am always looking for unknown and authentic places. I liked the vibe of Celerina's because it reminded me of one of my favorite locations south of the border, Copper Canyon, Mexico. Celerina's has just four tables, and a menu consisting of strictly traditional fare. When I'm eating out I want to feel like the food and the environment are one. Over the course of my infatuation with this spot I have tried most of the menu. My favorite dish is Birria de Res, a beef stew served with rice and beans, which I always eat alongside Celerina's house made horchata. All the tacos are stellar, with my favorites being a tie between the tacos de rez and the tacos de pollo (beef and chicken tacos, respectively). I love trying new things and have yet to find a dish I am disappointed with. During my most recent endeavor I opted for the pollo mole (chicken mole). Mole has chocolate in the sauce, yet this dish wasn't overpoweringly sweet as is the case in many Americanized versions. I always know when a mole sauce is traditional by the sweetness; authentic mole is made with well over 30 ingredients so the sauce shouldn't be like hot chocolate. This place is a family-run restaurant, with the chef doubling as waitperson, and Celerina's kids helping out on the occasional lunch. Despite the rainy Portland weather and cool temperatures, I can count on Celerina's to transport me to the feel of a Mexican marketplace.