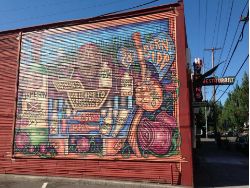 Tim Healea, the owner and baker of Little T American Baker, grew up in the Seattle area and moved to Portland in 1998 after culinary school, landing his first baking job at Pearl Bakery (he served as its longtime head baker for nine years). While at Pearl Bakery, Healea competed in 2002 with the Bread Bakers Guild Team USA at the Coupe du Monde de la Boulangerie, a prestigious bread baking competition in Paris, where the team earned the silver medal. The youngest person on the team that year, Healea was given the nickname "little T" to distinguish him from his teammate Tim Foley.

After leaving Pearl Bakery in 2007, Healea worked as a consultant for Kenny & Zuke's Delicatessen before opening the first Little T Baker on SE Division Street in 2008. The second Little T location, Little T Union Way, just opened last week. When Tim's not baking or working out (he works out a lot) you might see him loading up with his staff at a legendary Portland watering hole: Holman's.

After a long day baking, a significant percentage of the Little T staff can be found at our family hangout, Holman's on SE 28th at E Burnside. We started meeting there because it was in the middle of everyone's homes, but it really is the perfect place to unwind. And after being around carbs all day, nothing hits the spot like the ultimate fried mac and cheese bites, served with a ranch dipping sauce!

For me, the best thing is the build your own Bloody Mary bar on the weekend... you get your vodka on ice, and then it's your choice of all the fixins. I know sriracha is popular these days, but I'm a traditionalist and go for a heavy dose of Tabasco. Besides the Marys, our popular drinks are the Hot Toddy (great on the covered patio when it's a little chilly outside!) and a Vodka Press (vodka soda with a squirt of Sprite and lime). The time to go to Holman's is early afternoon (prime time for early risers!), when you can take advantage of the happy hour menu. Besides the Mac and cheese bites, we love the tot-chos (tator tot nachos) and Gorgonzola fries. There's also breakfast all day and the chicken fried steak is huge!

Holman's may not be fancy, but it's our place. And it's got a jukebox, pinball, buck hunter and lovely service from Zoey, Britney, Danielle and Corinne. Did I mention the all-season patio? And the "spin the wheel to comp your meal" game?