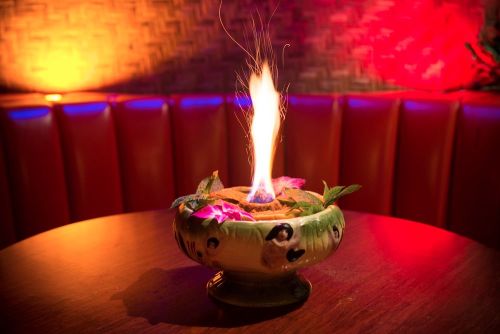 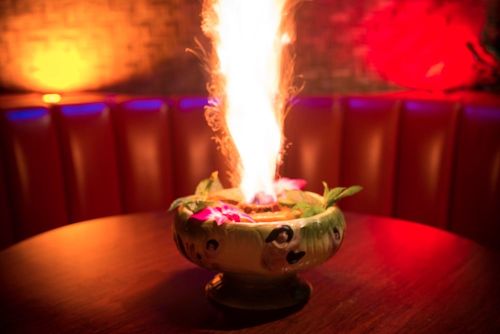 Tiki bars are beloved for their full-on embrace of kitsch, and NE's Hale Pele has some elements of your average tiki bar: volcano sounds, pufferfish hanging from the ceiling, and punch bowls that arrive to the table aflame. But owner/tiki aficionado Blair Reynolds goes beyond thatch on the ceiling: "A good tiki bar for me has a little bit of that whimsy, that magic that says, 'This isn't just come in and yeah, there's straw on the walls, drinks with rum,'" he says. "There's something behind it, there's a backstory."

Hale Pele — which recently celebrated its first anniversary — boasts a backstory reliant on appeasing a'a polloi (little lava people), whose image appears on the bar's signature red tiki mug. "They pour the cooling waters that keep Pele calm, as seen here on our front water fountain," Reynolds says. "They're our chief water bearers, and are also tied into our ancient order of water-bearers cocktail program." (Hale mugs aside, Reynolds' own 100+ mug collection includes pieces from iconic tiki creators like Steve Crane and the delightfully named "Crazy Al.") Here now, Reynolds chats with Eater about some of his all-time favorite tiki ceramics, the tiki resell market, and the process of designing a signature mug.

So how did the Hale Pele aesthetic come about?
I have as much design ability as a crayfish in a? thing I can't think of right now. So, I rely on a lot of local talent, which Portland seems to have. We're kind of overflowing with creative talent. So, a good friend of mine, Noel Henneman, I told him about what kind of backstory Hale Pele was going to have. Here at Hale Pele, our backstory is that this is a hut on the edge of the volcano, welcome to your last days in paradise. So, we're trying to keep the fires of Hale Pele cool with the help of these little lava people.

So, I gave him a little bit of story and he came up with a drawing of the lava people. I thought, "That is wonderful. I think this is going to be our signature piece." So we came up with the fountain in front, [Henneman] carved that himself, and when I said, "How about making a mug?" He said that was "Not my game," so we discussed bringing it to Muntiki, who had moved to town — they've been in town about two, three years now, originally from Monterrey — but they're huge on the tiki scene. So it just all came together. We had the right connections, didn't have to enlist the help of any mercenaries. 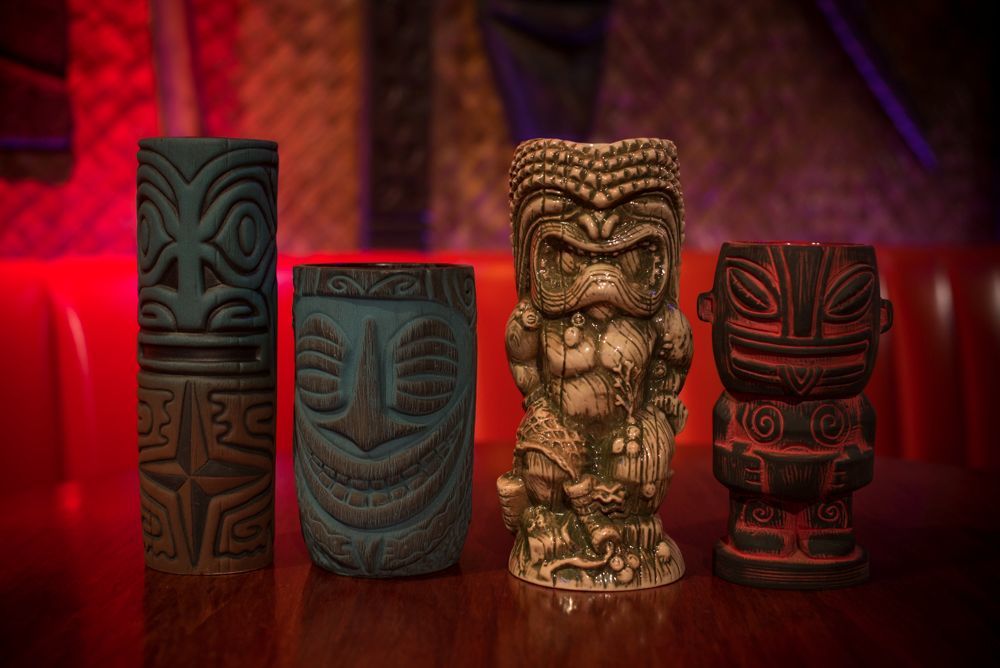 So how many tiki mugs are in your personal collection?
120 at this time. I've got nothing on a lot of collectors out there, but I keep trying. One of my most recent acquisitions is a punch bowl from Steve Crane's Luau. Stephen Crane was the man who founded the Kon Tiki line of exotic restaurants, one of which was here in Portland — and we have some of the decor from there. So we're trying to create our own tiki mug legacy, of course, it's nice to have some of the pantheon. And we're hoping to have more down the line.

Two of the mugs we have here [two at far left] are from two years of the NW Tiki Ton, which is a local gathering of tiki aficionados, the far two over here. This [red mug, far right] is our Hale Pele signature mug; they are all done by local artists Muntiki, a father and son team that have been producing tiki mugs for over a decade. We had a special edition of our Hale Pale one here for about two months, we had them on sale here for $90 — they went for about $300 on eBay. We should've kept them and sold them online. But we're so happy to have them and have them be good friends, and be local.

Let me ask you about this yellow mug here.
This fellow was a gift from Martin Cate, the owner of Smuggler's Cove, down in San Francisco. But it was designed by Crazy Al, who's kind of a big kahuna in the tiki scene, to bring Hawaii on into it. But he developed him as the first tiki mug for Smuggler's Cove — Smuggler's Cove has had barrels, a lot of barrels before, but never really a tiki mug — and of course it's big and tall, perfect for holding a Chartreuse Swizzle, which is one of the signature drinks of one of the bartenders there, Marcovaldo [Dionysos]. And it's just a classic ku design, but looking like it's dredged out of the bottom of the ocean somewhere. And of course, it classic — it has to have a good butt. [Laughs] People always notice if your tiki mug has a funny butt.

Tell me about working with Muntiki to design a mug. What's the back-and-forth like, creating an object that's functional and replica table?
One of the things we do is, there's always the fun stage where you put something together and go, "Okay this looks really cool," but for me as a tiki bar owner, I have to think: It looks cool, but is this going to hold three cups of a drink? How am I going to fill that? So, we actually worked to get it just the right size where it holds a perfect 13.5 ounces, which is just about the right size — it's a good middle ground for most tropical drinks. For the shorter ones, a little more crushed ice, for the longer ones, a little less. But this isn't just only supposed to be — it's supposed to be functional design. So a good mug has good hand shape, luckily the shape works really well for some grip; it's not going to slip out of your hands. Part of it just comes from the experience that Muntiki has, and owning a lot of tiki mugs and making a lot of tiki mugs. 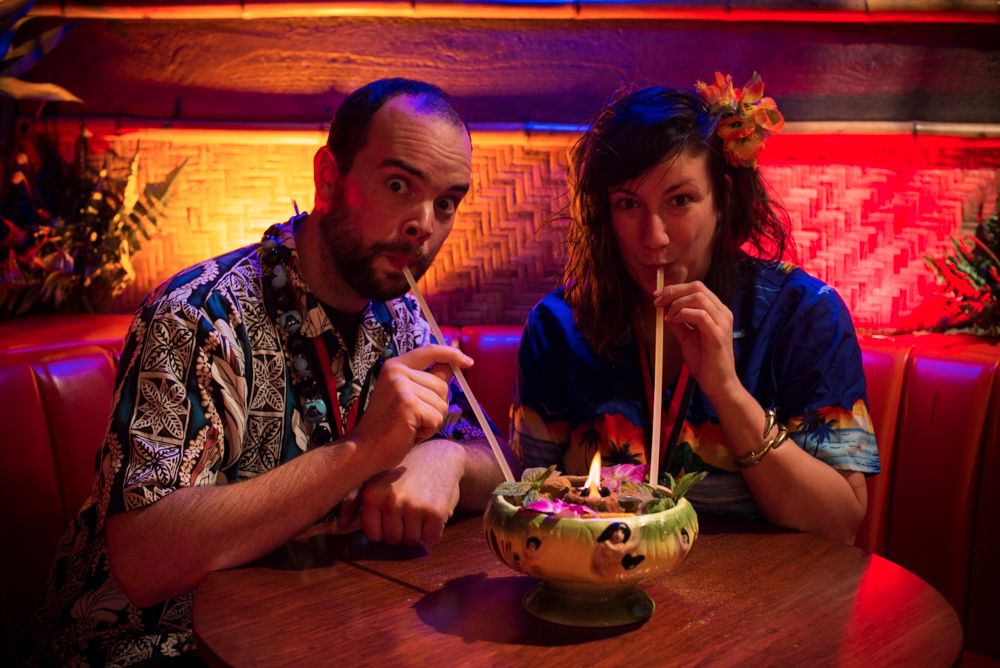 How much of your personal collection lives here at the bar?
Approximately less than five percent. Reason being, because we have such a thematic bar, it's hard to — I've been trying to justify, Okay, if I brought in all the tiki mugs, what if I put them along the lines? No, that would break the line of the straw hut, that kind of feel. If I put them there [along that back wall], that ruins the night illusion. And so, just space-wise, there's not a lot of place to put them up. We really try to create this certain ambiance, and the tiki mugs, unfortunately, I haven't found the right spot for them. We're working on it.

So when will the Hale Pele lava guy be available for purchase?
In the vaguely-stated winter of 2014. [Laughs] We're having — it's a lot of steps in the process. So we're hoping to do it by early next year.
· Hale Pele [Official site]
· All Previous Hale Pele Coverage [Eater PDX]
· All Cocktail Week 2013 Coverage [Eater PDX]