Welcome back to Lifers, a feature in which Eater interviews the men and women who have worked in the restaurant and bar industry for the better part of their lives, sharing their stories and more. 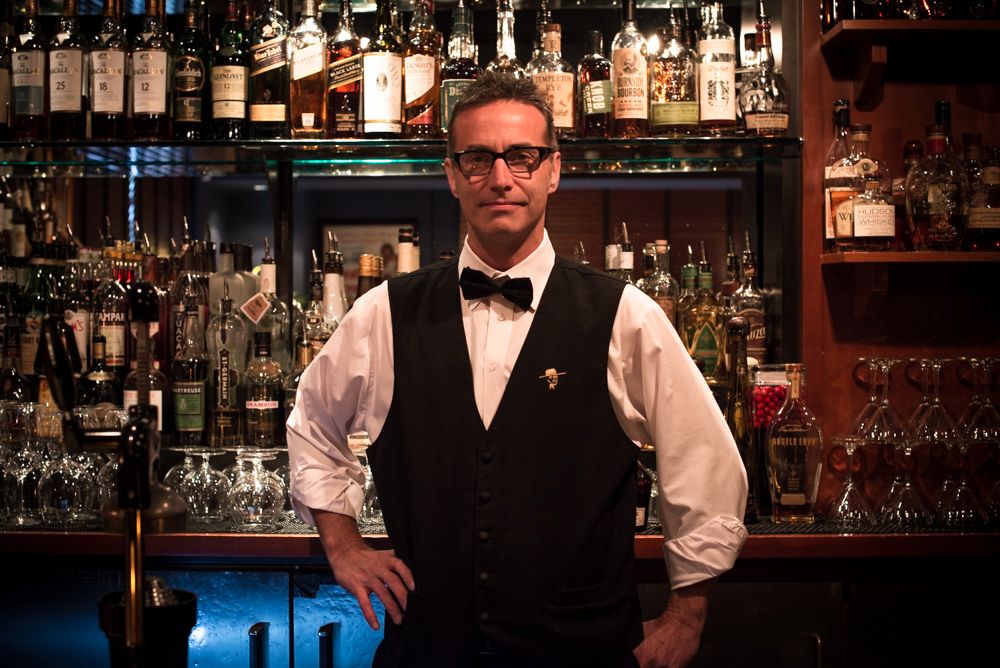 Long before there were celebrity bartenders, complicated cocktails, or even happy hour, there was Mark Joseph. The bar manager for Portland's El Gaucho for the last 13 years and counting, Joseph, 51, is a familiar face on the local bar scene, with more than 25 years of experience at the likes of Lovejoy Tavern, Casa-U-Betcha, and Veritable Quandry. (And when he isn't at El Gaucho, or at home with his family, you can catch him at his little brother's bar, the Morrison Hotel, in Southeast Portland.) In the following interview, Joseph talks about his years observing Portland bar culture, once owning the title "Best Bartender to Look At," and what never to say behind the bar.

When did you make your first drink?
I was under age and I weaseled a job out of a friend. It was in Eugene, at a bar called Shelly's, just off campus from the University of Oregon. I was studying to be an elementary teacher. I was having drinks with the owner and he offered me a gig as a bartender. I had never made a drink in my life, but I thought I would give it a shot. Once the manager realized I was only 20, she had me flipping burgers in the kitchen. But that didn't last very long.

So when did you become a professional bartender?
In 1985, I moved to Los Angeles to become an actor. That didn't last very long either. There was this club on Santa Monica Boulevard called Figaro's. One of the servers dared the manager to hire me. And that's how I ended up with that job. There was nothing complicated about being a bartender in Los Angeles. The only reason I became a bartender was because, at that time, bartenders were allowed to drink behind the bar in California. One of the bartenders, Jerry, was always hammered by 9p.m. I told him that I would take over at that time, and he could just hang out. It was just beer and shots and gin and tonic. None of the drinks had more than two parts.

Did you serve any famous Hollywood patrons?
Roy Scheider and his wife came in a lot. I always made her herbal ice tea even though it wasn't on the menu. Gavin MacLeod, of Love Boat fame, always came with a large group of young men. The servers would fight over who would serve him because he gave fat tips.

What did you do after that gig?
In 1986, I moved back to Portland. I was the service bartender for Papa Haydn's in NW Portland. I had heard about a great new place called Lovejoy Tavern [formerly located at NW 21st and Lovejoy] and I interviewed for the job. I lied about my experience and Lovejoy Tavern had complicated drinks that had everything in them including ice cream. On my first night I was super slow. The manager, Terry Moore, said, "You don't know what the fuck you are doing, do you? To his credit, he said I could stay and learn from him or I could "get the fuck out." I stayed. But it wasn't easy. For the next two weeks Terry would stand behind me and punch me in the shoulder to get me to use both of my hands. I learned to pick up my pace really fast.

When Lovejoy closed, Joseph followed that gig with his first turn at the Veritable Quandary and the infamous, long-closed Casa-U-Betcha, where now MuuMuu's sits on NW 21st Avenue. According to Joseph, "everything?and I mean?everything went down there."

Isn't Casa-U-Betcha where you were voted "Best Butt" by Willamette Week?
Not exactly. It was 1988 and I was voted WW's "Best Bartender to Look At." Casa-U-Betcha was a very hot club, but the first year they didn't have a full liquor license; for a long time they just served beer and wine. I remember that I was out drinking with the owner, Jeff Steichen [who now owns a distillery in Seattle called Batch 206], and he said to me, "Do you want to work for me or what?" He taught me the attitude behind the bar or restaurant was as important as knowing how to make a drink. He also taught me to not take drinks so seriously. He always says, "cocktails are supposed to be fun." That's where I made my first infusion, "Sagre del Diablo," with two rums, pineapple, vanilla beans, and brown sugar. We also made up wacky drinks like the "Three Mile Island" with iced tea and Everclear. It was the first time I realized I could make anything into a drink. Casa-U-Betcha had an "anything goes" vibe that was both a good and a bad thing.

Joseph eventually ended up back at Veritable Quandary where he stayed during a good part of the 1990s and broke up his share of fights.

How many fights have you broken up in your career?
I can't recall how many times in my life I've had to throw someone out of a bar. I'm not a big guy and I've made some really bad decisions about getting in the middle of shit, but most of the time I could break up fights without much of a scuffle by jumping up onto the bar and jumping right in the middle of the two people fighting. I would always push the biggest guy away from the fight. That seemed to almost always work. I remember when I used to work the door at Key Largo, this was before everybody had a bouncer, that I would three sweatshirts under my coat just to look bigger.

When did you start working at El Gaucho?
It was in 2000, when they opened. It was my first "official" interview in a professional house. I've been the bar manager there for the last 13 years. During that time I've served everyone from Michael Jordan to Tommy Lee Jones to Bruce Willis. Funny thing, the only person that made me starstruck was Bob Newhart.

What is the worst and best part of the job?
There really isn't a worst part, but cleaning up puke is pretty bad. Also, it's a pretty physical gig. I am not sure I want to be behind the bar at the age of 70 getting my ass kicked. The best part of my job is that, due to my schedule, our kids never had to have a babysitter. I also met my wife, Ronda, when I was behind the bar at Casa-U-Betcha.

What is the biggest tip you've ever received?
Well, one of my customers helped to fund my daughter Ruby's college fund. He gave me a big tip and told me to put it toward her college fund, and then, the next time he was in, he asked if I had done it. I said, No, that I was hoping to get closer to $1,000 before starting it. He said, "How much do you have already?" I said, "three hundred." That's when he pulled out a wad of cash and peeled off seven $100 dollar bills. I invested it in her college fund the next day. And the artist, Tom Hardy, once gave me a ruby in honor of my daughter, too.

What are your thoughts about happy hour?
It's part of the business in Portland, but it doesn't have to be. I don't mind a special menu to build up the early evening crowd, but it's not a great business plan to discount your product. If you are doing the right thing then people will come and see you. But happy hour is so Portland, you have to do something.

What is your best advice to give someone about ordering a drink?
Don't be afraid to ask your bartender what is good or new. It's on the menu because the bartender believes it's good and wants you to try it.

And the worst advice to give from behind the bar?
I'll jump into almost any conversation, but I never mix politics and religion. Never.

And your thoughts on Tom Cruise in the movie Cocktail?
If I had to spin a bottle in the air, I'd probably drop it.
· El Gaucho [Official site]
· All Cocktail Week 2013 Coverage [Eater PDX]