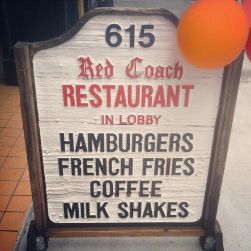 Southpark executive chef Ryan Gaul, born in Idaho and raised in Spokane, Washington, first discovered his passion for cooking after moving to Portland in 2001. It was at Pazzo Ristorante and Caro Amico where Ryan honed his culinary craft, and he's been polishing it at Southpark since 2009. The Northwest native enjoys butchery and cutting up fish, so it's no surprise that Gaul is beefing up Southpark's in-house butchery program — making bologna and headcheese, and expanding the offerings on the charcuterie plate. Not far from SP, Gaul's fond of another old-school eatery that does neat feats with meat: Red Coach.

Red Coach is a tiny place on Broadway, tucked into an office building. It's a bit eclectic: they are on two floors, have two kitchens, and are only open for lunch. They have these great red tufted booths and always tons of magazines to read. It's been open for years and run by the same family. When I went there years ago, the parents were running the place, now it's their kids and the grandkids are lending a hand. The last time I was in there, there was a girl bussing tables — someone's daughter — who looked like she was no more than 10. They moved a number of years back, but they still have photos of the original diner when it was located down the street from the old Meier & Frank. The burger at Red Coach are not a stupid riff of a burger, not someone trying to show off. They are just good solid burgers cooked on a flat top. I always order the Double Karl's with bacon.