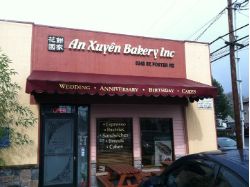 Jason Kallingal of the new wood-fired pizza spot on N. Williams, Life of Pie, was born and raised on Guam, after his parents moved there from Kerala, India. Jason moved to the states, and specifically Portland, to earn his undergrad degree. At age 22, he opened up Paccini after he saw a need to deliver high-quality cooking to college students. During his days downtown at Paccini, Kallingal earned his MBA before selling his biz to Rogue Brewery and setting off to study food and sustainability overseas in Italy and France. Once back in the states, Jason became an Economic Development Manager at a non-profit focused on youth professional development in outer SE Portland. That's where he discovered one of his favorite bakeries: An Xuyen.

An Xuyen Bakery has been a favorite for a while. For $2.99 I get the lemongrass chicken bahn mi and it is amazing. The bread makes the sandwich, much like a great dough makes a great pizza. The baguette is baked in house. Vietnamese baguettes are usually more airy with a thinner crust compared to French baguettes, so it makes it similar to the pizzas we are making at Life of Pie: Light and airy with a thin, crispy outer layer. They also have delicious steamed buns with meatballs or barbecue pork and every type of desert you can think of.

Photo of An Xuyen courtesy Steve S. via Foursquare

One Killed, Two Others Injured in a Shooting at a Northwest Portland Pizzeria and Bar