Double D's Rob Walls Shouts Out for Mao at Shenzhen

Share All sharing options for: Double D's Rob Walls Shouts Out for Mao at Shenzhen 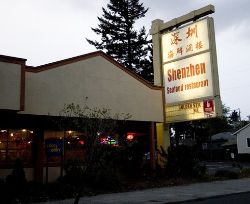 Rob Walls is the chef and owner of Double Dragon, a SE Portland bar serving what he calls "Orient by Occident." Walls knows no boundaries when it comes to the "authenticity" of any one style of food: After graduating from Georgetown University, Walls knew he wanted to work in a kitchen, and thanks to a half-drunk conversation with a friend in New York, Walls cold-called David Chang at the four-month-old Momofuku, asking for a job. Walls says nobody ever went further out of their way than Chang to help him develop as a cook, lending Walls his CIA textbook, teaching him how to sharpen and use a knife, and giving him the hardest and most rewarding job he'd ever had.

Post-Momofuku, Walls worked at the Food Network for two years, then in NYC kitchens like Lupa, Tia Pol, and Txikito. Walls eventually made the move to Portland and was hired at Beast and Bunk Sandwiches, all before going into business for himself and opening DD in 2011. It should come as no surprise, then, that one of his favorite spots is as eclectic as his resume: Shenzhen Seafood Restaurant.

Shenzhen Seafood Restaurant is, aside from Yuzu in Beaverton, the Portland area restaurant I happily travel the furthest for. I always hear that Chinese restaurants secretly have two separate menus, one Americanized and one more traditional. Shenzhen just seems to just lay it all out there (or at least most of it) for everyone. The name of one menu item is "Couple Pieces Lung." I haven't tried the lung but the Cold Pork Stomach is, in tastiness, inversely related to the poetic qualities of its name. The Crispy Fish Maw is not at all crispy but very much delicious. There's a pork belly dish seemingly lacking an English title that is located just below a large portrait of Mao Tse-tung on the menu. I usually just point and say, "Mao?" It's as tender and unctuous as pork belly preparations you'll find at the trendier spots all over "close-in" Portland. I've become so used to mainly seeing these kinds of nose-to-tail cuts at more expensive, meticulously stylized, "cheffy" restaurants. Most of which are, granted, really great. But there's something about getting well-executed dishes featuring these cuts in a quintessentially divey-looking Chinese joint that makes you feel like you're getting away with something.

Photo of Shenzhen courtesy Don B. via Yelp