The Panelists Name Their Biggest Dining Surprise of 2013

Share All sharing options for: The Panelists Name Their Biggest Dining Surprise of 2013

As is the tradition at Eater, our closeout of the year is a survey of local food writers, industry types, and friends. We asked the group eight questions, from Best Dining Neighborhood to Best New Restaurant, and all will be answered by the time we turn off the lights at week's end. Responses are related in no particular order; all are cut, pasted, and unedited herein. 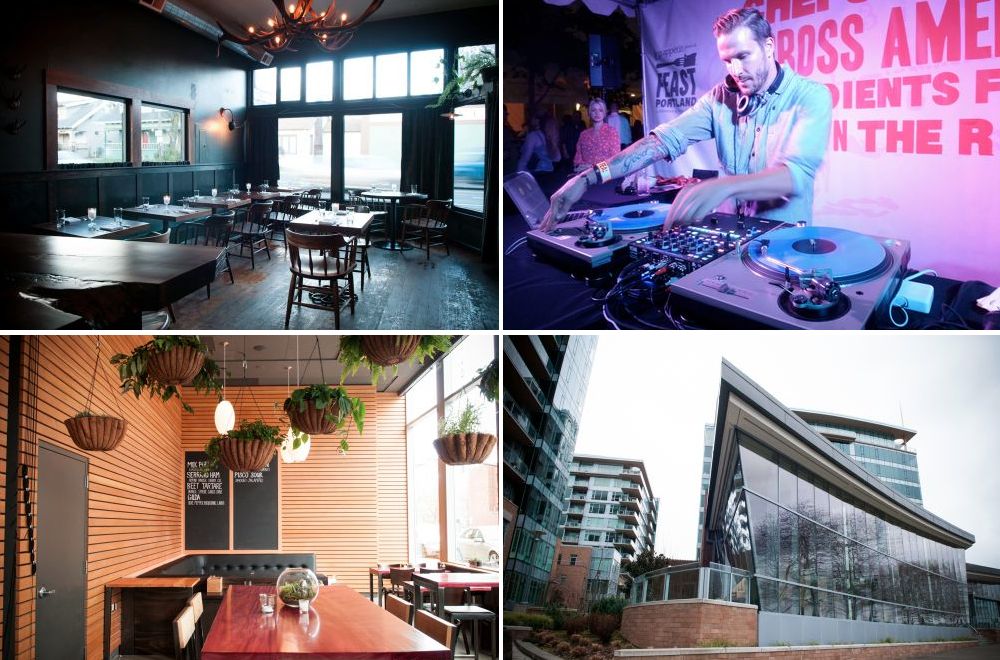 Q: What was the biggest dining surprise of 2013?

Mike Thelin, co-founder, Feast Portland:
Had to be Ración. Lots of folks were skeptical about a concept like that in Portland (especially me), and yet Anthony delivered modern-inspired food with an atmosphere and price point that Portland really loves. So kudos to chef Cafiero. Ración is an approachable primer and intro to something that most of Portland had previously rejected. It also has a great bar space.

Michael Zusman, author and freelance restaurant writer:
After many years with at least one standout opening, nothing this year took its place in my top tier. My favorite restaurants at the end of 2012 are still my favorites: Ox, Smallwares, Aviary, Roe, St. Jack, and Little Bird come readily to mind. I was also surprised at just how abysmal Quartet turned out to be given that the owners had a clear "things not to do" road map to follow from the Lucier experience. Fine dining in Portland set back another generation.

Paul Gerald, author, Breakfast in Bridgetown:
For me, the closing of St. Cupcake is a crushing blow.

Dina Avila, freelance/Eater photographer, Eater PDX
Multnomah Whiskey Library. A departure from any other concept in Portland. Meticulously curated design elements. I mean, barware imported from Japan,  an extensive vintage glassware collection, commissioned paintings of notable figures in whisky history, 1,500 bottles of whiskey and then some? Plus, it's not an inexpensive venture, but it is a hugely successful one. Alan Davis tapped into a clientele in Portland that had no idea it needed to be tapped. Oh, and the food is really really good.

Chris Onstad, restaurant critic, Portland Mercury:
The Portland Mercury's Burger Week was the most intense event of 2013. Response was so overwhelming that restaurants literally buckled under the load. Our top performers, Pause and Tilt, tell me they turned out 2,300-3,000 $5 burgers that week. It was phenomenal. I'm surprised there weren't riots and police helicopters. 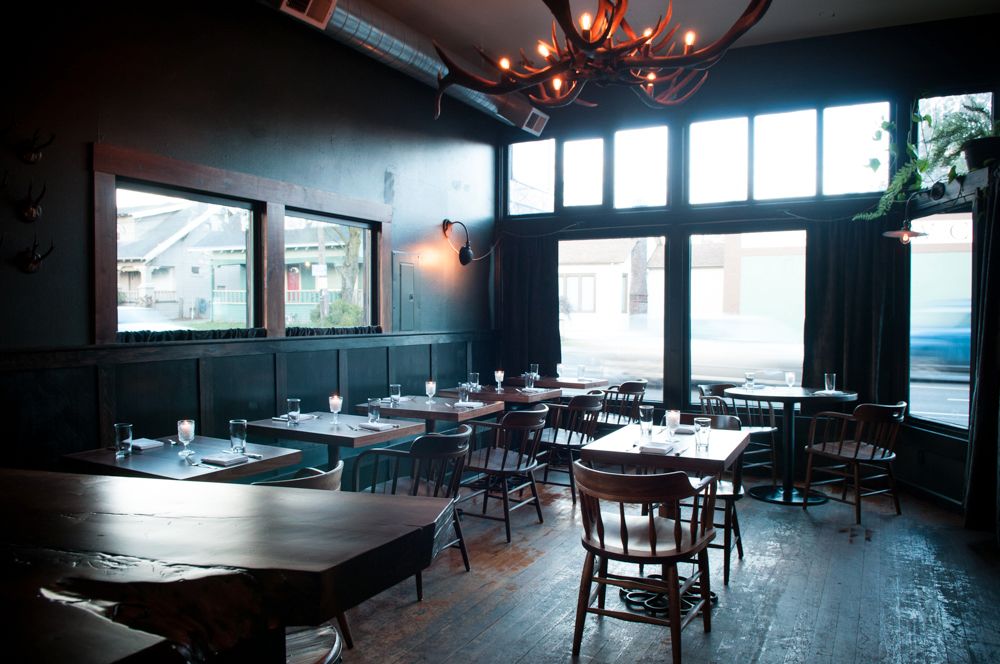 Martin Cizmar, arts and culture editor, Willamette Week:
Albatross in Astoria... That's where Eric Bechard now makes sandwiches. I haven't been there yet, but its existence surprises me because I was the one person totally stunned by the Kingdom of Roosevelt's abrupt closure. I know the Eater trolls smelled blood (shout out to guest #2!), but I thought Bechard's resume and the novel menu would keep it afloat for at least a year. I was wrong, and I'm sad we won't get to see the concept in fully refined form.

Ben Tepler, contributing food writer, Portland Monthly:
Probably the food I had a few months ago at the Burrasca food cart on SE 28th and Ankeny. People had mentioned to me that they were doing real deal Florentine cooking, but I was skeptical. On my first visit, Paolo handed me a bowl of inzimino (slow-braised squid in a rich, garlicky sauce of tomato, red wine, and spinach). I was hooked. You can't find old-school Florentine like that anywhere in this city, and especially not at that price point.

PDX Food Dude, editor, PortlandFoodandDrink.com:
I can't let the year end without mentioning how great Feast was this year. It brought a ton of attention to the Portland food scene, not to mention lots of tourist dollars.

Andy Kryza, senior editor, Thrillist:
Not only did Feast Portland reinforce its status as perhaps the nation's greatest food fest/party, it showed that the people who are innovating in the kitchen are just as passionate about drinking humble media folk under the table.

Georgia Frances King, editor, Kinfolk Magazine:
When I was at Whiskey Soda Lounge and watched a friend order a Bloody Mary at 10p.m. She looked at my, "B-but, it's not 11am on a Saturday?!" expression and told me to watch and wait. What came out was nothing like a Bloody Mary I'd ever seen before: a clear, red tomato-and-chilli cocktail garnished with fresh Thai herbs. I don't know what they put in those things, but it's all I drink there now.

Byron Beck, local gadfly and Eater contributor, ByronBeck.com:
B.J. Smith's Smokehouse 21 on NW 21st Avenue. I regret that it has taken me so long to check this place out. Now that I finally have, I can't stop thinking about the brisket. Also, was it just me or did it seem like this was the year of roasted Brussels sprouts? And are cupcakes really going out of style? 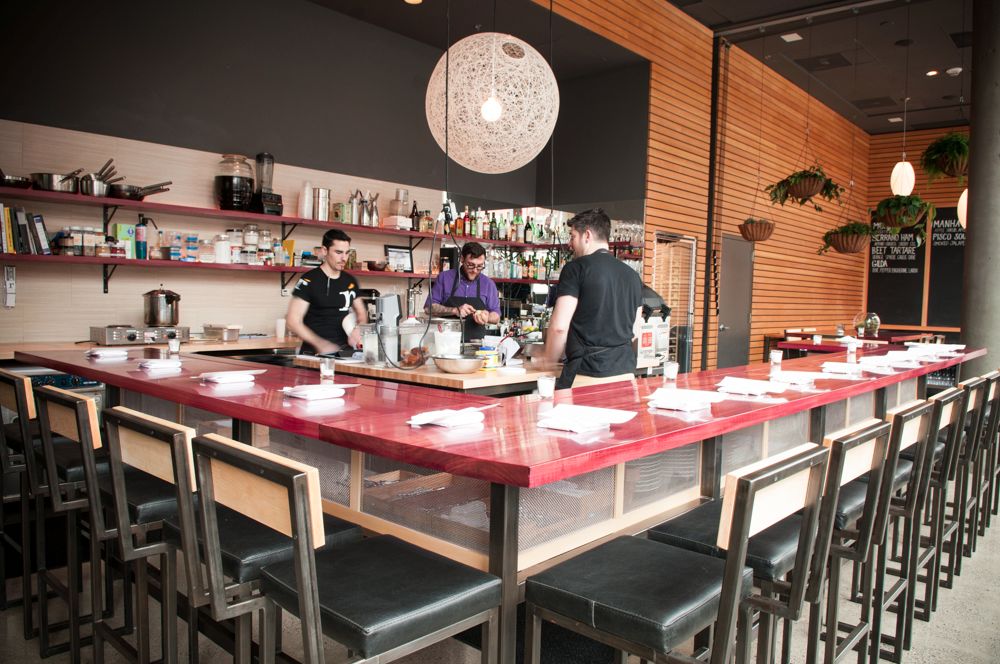 Allison Jones, web editor, Portland Monthly:
That Ración turned out to be delicious. Back when Anthony Cafiero was at Tabla, he'd try out some pretty off-the-wall modernist experiments on me, and, more often than not, I hated them. They just weren't my thing. But then he dove in 100%, stayed true to his playful side, and opened this gem of a restaurant that has wowed me again and again.

Adam Lindsley, freelance food writer, Serious Eats/The Oregonian:
Finding out that Ate-Oh-Ate serves one of the best burgers in Portland. Also, Baby Doll Pizza. I know it opened in 2012, but I was not a fan of that space's former occupant and assumed more mediocre pizza would take its place, so I didn't try it until May of this year. Big mistake.

Karen Brooks, food critic, Portland Monthly Magazine:
Some of the best — and most ambitious — cooking in town is coming from supper clubs and pop-ups like Coquine and Holdfast. This once underground food model is now a viable springboard for talent, ambition and brick-and-mortar concepts.

Erin DeJesus, editor, Eater PDX:
This isn't a new idea at this point, but I'll echo: That Quartet is still open.

Jordan Michelman, founder, Sprudge.com:
I used to make a point of eating tacos whenever I travel to Chicago, or California, or Kansas City (there's great tacos in KCMO), because I assumed there were no good non-trendy tacos in Portland. Then I moved down the street from Taqueria Portland in deep North Portland. Taqueria Portland makes very, very good tacos; they're also kind of an all-purpose Mexican diner, which means great pozole, addictive enchiladas, buckets of Modelo, and great big frosty mugs of horchata.  This spot has been around for years, so it's just a surprise for me, I guess, but a very happy one indeed.

Also, the deli and marinated meat offerings at the Chop counter at City Market are continually surprising to me. Surprisingly, shockingly good — have you had their bulgogi? How about their tasso ham? This place is excellent, and I'm surprised I don't hear more about it around town.