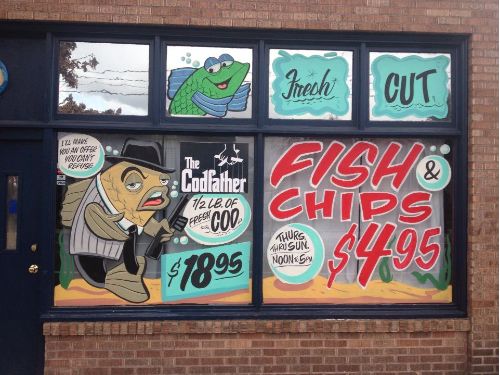 Joel Gunderson — the current general manager of St. Jack and partner of the soon-to-be-open Coopers Hall — has been with St. Jack since it opened in 2010. Gunderson, an experienced sommelier, set up the on-tap wine program at St. Jack and curates many of the wine lists at ChefStable restaurants. In February, he will be running the taproom at Coopers Hall on 404 SE 6th Avenue — and more than likely still keeping it "authentic" at one of his favorite haunts, North Portland's Fish & Chip Shop.

My pal from Manchester introduced me to the Fish & Chip Shop a few years back. I'm not sure if he liked it because of its "authentic" style of fish and chips, or because it wasn't an IPA-battered fish and chip, served by a tatt'ed-up hipster. He told me both reasons on the drive over. Either way, I get it. This is kind of my greasy spoon diner fix. It's simple. It's straightforward. I don't think I would ever be tempted to drink wine with it. The service is laughable, but at the same time, I don't care. I'm just there to pick up my fish and chips and drink a Newcastle while I wait. They do warn that all their food is deep-fried in animal fat, and that makes me happy. I read the sign over and over again while I wait.