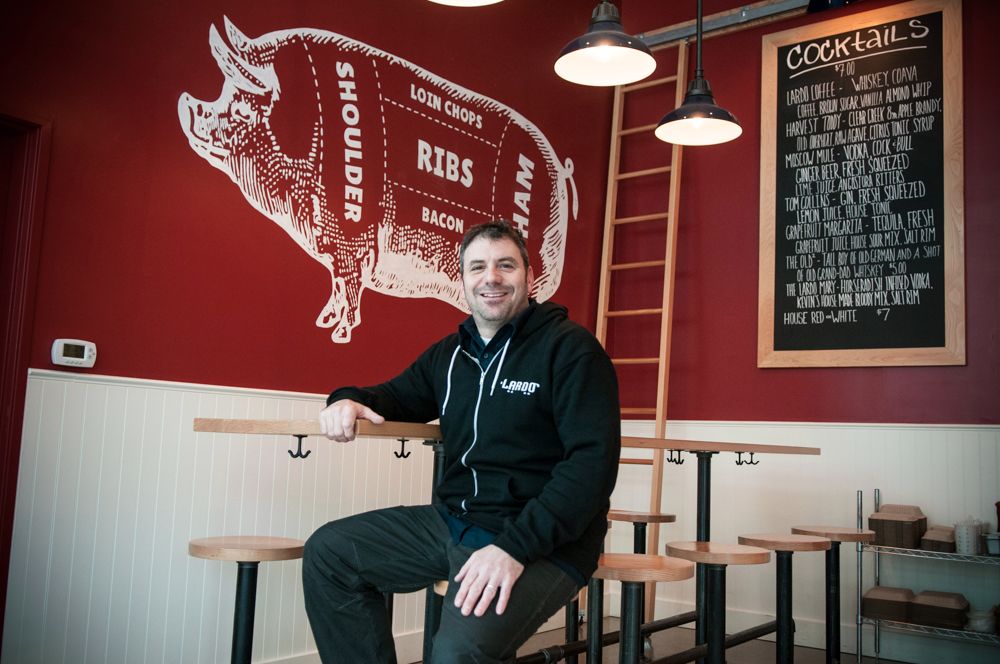 Rick Gencarelli's masterful manipulation of meat and bread has secured his place in the Portland sun — or, well, you know. His food cart Lardo, specializing in unapologetically rich sandwiches, has boomed into two brick-and-mortar locations in a mere six months. However, despite his victorious expansion, music nerd Gencarelli misses when he could blast Gang of Four and the Beastie Boys directly to customers from a subwoofer behind the food cart.

For this second installment of On the Record, Eater sat down with Gencarelli to talk about how he uses music as a tool to connect and converse with customers at Lardo, even when he's not on the front lines. Also included: a Gencarelli-curated Spotify playlist, complete with the handpicked jams he blasts in both Lardo's dining room and its kitchen. Don't expect any Gypsy Kings.

Who do you turn to to make playlists for the dining room?
Well, it's sort of been a progression. When I started in the cart, we had speakers and a subwoofer, and I had my iPod, which has like 19,000 songs on it. So obviously I just played whatever I wanted nice and loud all the time. And it was fun because it was direct communication with customers, which I miss now 'cause I'm sort of taken away from them. I'm not on the front lines anymore, I'm in the kitchen or I'm bouncing between the two shops. I'm not as hands-on with the music.

When we opened on Hawthorne I was making playlists. I would just go home and I would do Spotify playlists or make a playlist on my iPod and plug it in. But now, Nick Schuurman is the GM downtown and he turned me onto this thing called DMX. What you can do is you can program radio stations every 15 minutes of the day for the whole day, so if you're open 12 or 13 hours, every 15 minutes you can program it for a different radio station. In the morning if you want Bob Dylan and the Velvet Underground, and then you want to transition into blues and Sharon Jones later on in the day, you can just program the whole day. So that's what we've been doing at both stores.

Who are some of the artists you find yourself coming back to?
Well, right now it's kind of set. But Gang of Four. I love Gang of Four. I love that era of post-punk English stuff [like] Wire. I've really been digging a lot of that stuff. But it's different in the kitchen. We listen to different music in the kitchen. At Hawthorne we've got a lot of metalheads in the kitchen, but it's great 'cause it's super busy here most days, so these guys will put on Red Fang or the Sword. It gets pretty heavy at Hawthorne, especially for lunch.

And that sounds pretty common. When I talked to Tommy [Habetz] I remember him telling me that in the kitchen it was always metal and rap.
Always, and especially if it's busy, there's that cadence. There's a lot of things that always work in the kitchen, and that's like the Stooges, Zeppelin, metal, and hip-hop of all kinds, back to '90s stuff. When I first started cooking in Boston it was all De La Soul, a Tribe Called Quest, EPMD, Roots, Gang Starr. It's funny, certain albums take me back to certain times in my cooking. In Boston it was like, [Beastie Boys'] Ill Communication came out when I was working as a line cook in Boston, so that whole album brings me right back to my first year out of culinary school. And then cooking in San Francisco was all Sonic Youth and the Replacements. You know, different eras in my career are kind of mapped out by what kind of music I was listening to.

How do you think the food at Lardo informs what's being played, and vice versa?
I think it's all about setting a mood. I think that's all we want to ever do as hospitality people. Lardo is like my home, and when people come into Lardo it's like, "Here's what I like to eat, here's what I like to listen to." You know what I mean? And it's anything goes here. I guess it bugs me when the music doesn't fit the mood — that's kind of what it's all about. I was in a restaurant downtown the other night and it was about 7ish, a half-full room. It was some older, kind of baby-boom generation people having dinner, and they had Judas Priest just cranking. And it just didn't work. I liked it, but it was like damn, this is really not right. It's more about having it work. You go into some places and the music just feels so organic, like at Stumptown on Belmont. I love going in there because they're always listening to something great, but it's not in a contrived way. You can tell that they really felt like listening to Joy Division, or it's raining out and they had Beach House on. They're super passionate about it and I think that comes through.

Is there any genre or album in particular that, when played in a restaurant, just makes you want to leave?
When I was cooking in Boston, everyone was playing the same Gypsy Kings album, and I don't think I could tolerate that. And Miles Davis' Kind of Blue for lunch is pretty much — it's great, but I mean, it doesn't really show a lot of imagination. I mean, it's absolutely amazing, but there are so many other jazz albums that you could be playing for lunch. And I think my years cooking in San Francisco in a basement with a bunch of prep cooks, and as line cooks we had no control over the music, and every day, day and night, they listened to Mexican polka music. It absolutely drives me nuts. Oh man, I've had enough of that.

What kind of feedback do you get from diners at Lardo? Positive or negative?
Both. We got a Yelp review, I think we were playing some pretty aggressive hip-hop with some swear words, and we got in trouble for that. We're trying to be a little more sensitive to people who bring their families. I don't know, most people are pretty into it, for the most part. I like when people are SoundHounding or Shazaming the music. But I like having conversations about music, though. Those apps are cool when you don't have someone to ask, but if there's someone there, I'm like, well, let's talk about it.
· Lardo [Official site]
· All Previous On the Records [Eater PDX]