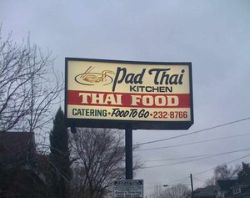 Erik Van Kley, executive chef at Little Bird Bistro, has been working with chef Gabriel Rucker since 2005. A native of Grand Rapids, Michigan, Van Kley entered the culinary circuit in 1994 as a line cook in his lakeside hometown, working his way up to an executive chef position. But after 10 years of professional cooking, Van Kley decided to attend culinary school, and upon graduating, he set his sights on Portland, Oregon, noting that it was on the verge of culinary greatness.

In 2005, Van Kley began working at the Gotham Tavern, where he met future colleague Gabe Rucker (the pair also worked together at Portland's acclaimed Nostrana). When Rucker left to begin Le Pigeon, he recruited Van Kley to join him — and the duo have been together ever since. According to Van Kley, his past experience influences his outlook and the menu at Little Bird: food can be taken seriously without taking yourself too seriously. So where does Van Kley go when he's seriously hungry? SE Belmont's conveniently located Pad Thai Kitchen.

My favorite under-the-radar place would be the Pad Thai Kitchen. I didn't have to scour for this spot, as it's about one block from my front door. Convenient, I know. The place smells like it's been cranking out pad Thai for years, and I believe it has. I always order the Massaman curry, the Tom Kha soup (hot and sour with coconut milk, lemongrass, galanga roots and kaffir lime leaves) with a side of rice, or the chicken noodles, with egg, green onions and cilantro. The service is awesome and sometimes comical to say the least. If I order the same thing too many times in a row, the owner will tell me I've had "enough curry and this week" and I'll be "having the beef boat noodle soup." I may not have a choice in the matter, but her judgement always ends up being better than mine. It pays to live close. Insider tip: if you pick up to-go food, the portions are twice as large as the dine-in portions. I mean they really fill the box! Everything on the menu can be ordered mild, medium, hot, or extra hot. Extra hot at eater's risk!

Image of Pad Thai Kitchen courtesy Patrick B. via Yelp