Share All sharing options for: Behind Cart Doors at Cart Row's Big-Ass Sandwiches 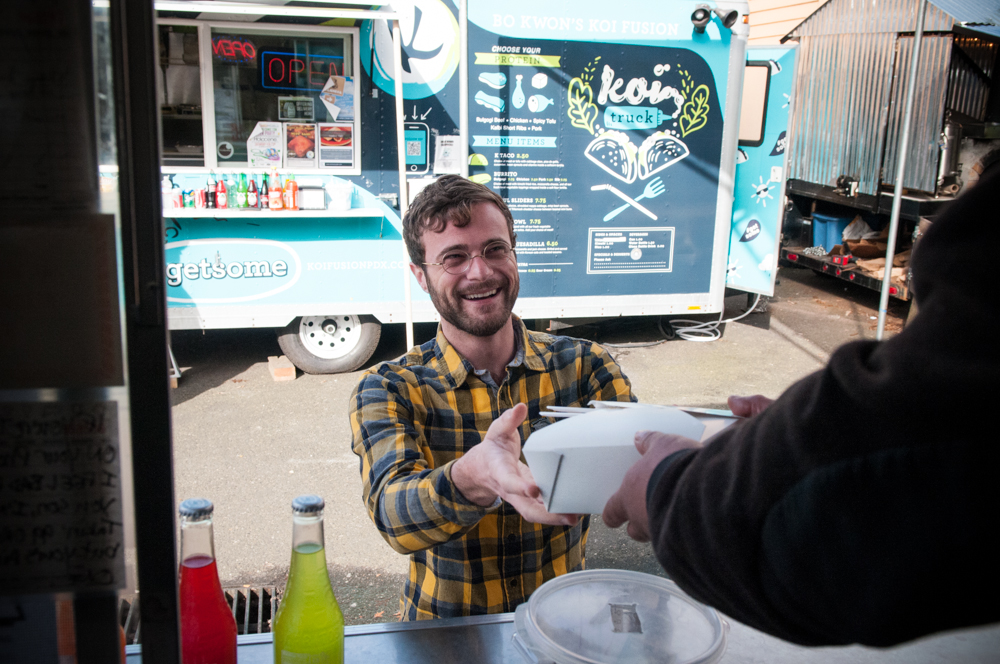 After Lisa Wood's third layoff in just three years (Lisa worked in the fickle world of radio broadcasting), she and her husband, Brian, decided to open a restaurant/pub. At least that was the plan. "It was late 2009, the economy was in the toilet and there were no loans or financing of that caliber to be obtained," says Lisa. "We went back to the drawing board, and once we realized we could design a [food] cart as we needed, with a full commercial kitchen setup for a manageable startup cost, we went for it."

Oh, boy did they ever. Big-Ass Sandwiches is a popular SE food cart serving hot sandwiches with homemade meats, hand-cut fries and homemade sauces (Bechamel cheese, Caesar, Au Jus). Brian, who had been working in restaurant kitchens for 20 years, created his "big-ass" sandwiches out of quickness and necessity before a long shift on the line. "He'd put everything in the sandwich, including the fries," says Lisa. "We love it, we thought others might." And so Big-Ass Sandwiches — which now has five other employees aside from the Woods — was born out of the simple idea of offering just a few sandwiches, homemade ingredients, local products... and fries... lots of fries. Eater sat down with Lisa Wood to talk menu-planning in small spaces, Big-Ass' one "wish list" item, and the weird things that happened outside their Old Town window. 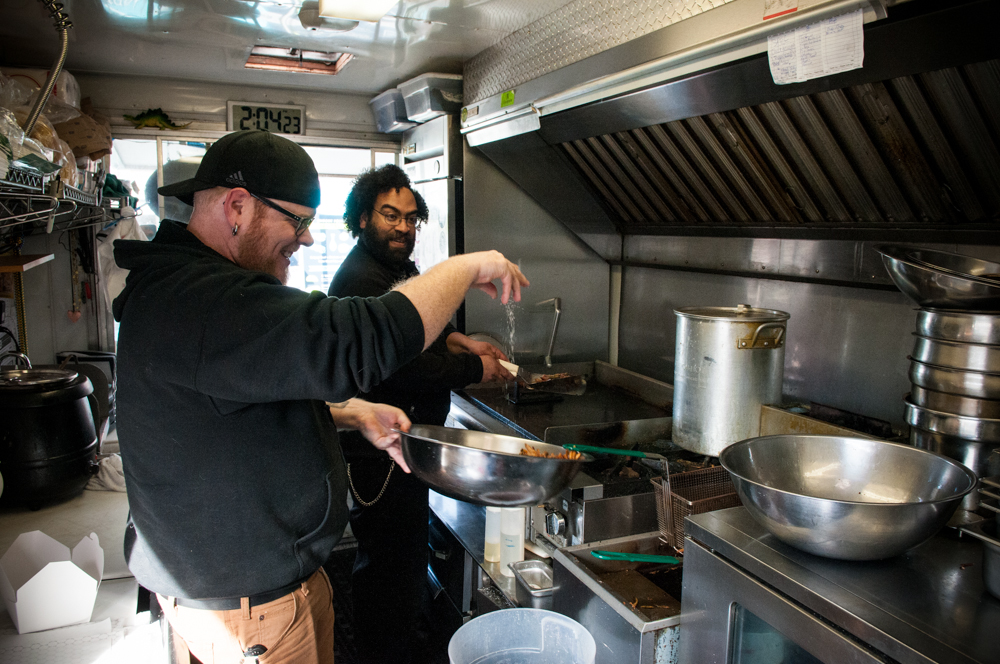 What's the size of your cart?
Eight feet by 16 feet.

What's the size of your cart window that looks out onto the street?
Around four feet by five feet, it's on the blueprints... but we're not sure where those are.

How much prep/fridge space do you have, and how does that affect what you offer on your menu?
We have two worktop fridges and another tall fridge. We also have a convection oven, a fryer, a three-compartment sink, a handsink, and a fry wanking station. It's tight quarters, but after three years, we've really dialed ourselves in. That's another reason we kept the menu simple. You don't want to pile on, especially when you're working in a tiny space. Our menu will stay about the size it is, with slight variations, but we're pretty maxed.

What are the advantages/disadvantages of having limited space?
Advantages: It doesn't cost as much to operate, we get to enjoy spring andsSummer, somewhat outside — it gets HOT! — and it only takes a half-day to do a full deep clean. Disadvantages: Frigid cold and pretty slow in the winter. Finite space caps the amount of business you can do, so the game becomes efficiency and what you can do out of that space. And in our old spot you could add no running water, no dumpsters, no bathroom.

You mentioned an old spot. How many times has the cart moved?
Just once. We were downtown for the first three years. Over the summer our sandwich was featured on Travel Channel, [so] we had lines around the block and were selling out at about 2p.m. every day — it was insane. We realized trying to maintain any kind of volume was going to be impossible in that spot — we had outgrown it. Our new space is amazing, we are next door to a commissary where we can store back-up stock, have dumpsters, running water, natural gas, covered seating, and killer neighbors. It's so much more communal, it's a fun place to gather. We have big plans for events in the summer, it's going to be awesome. 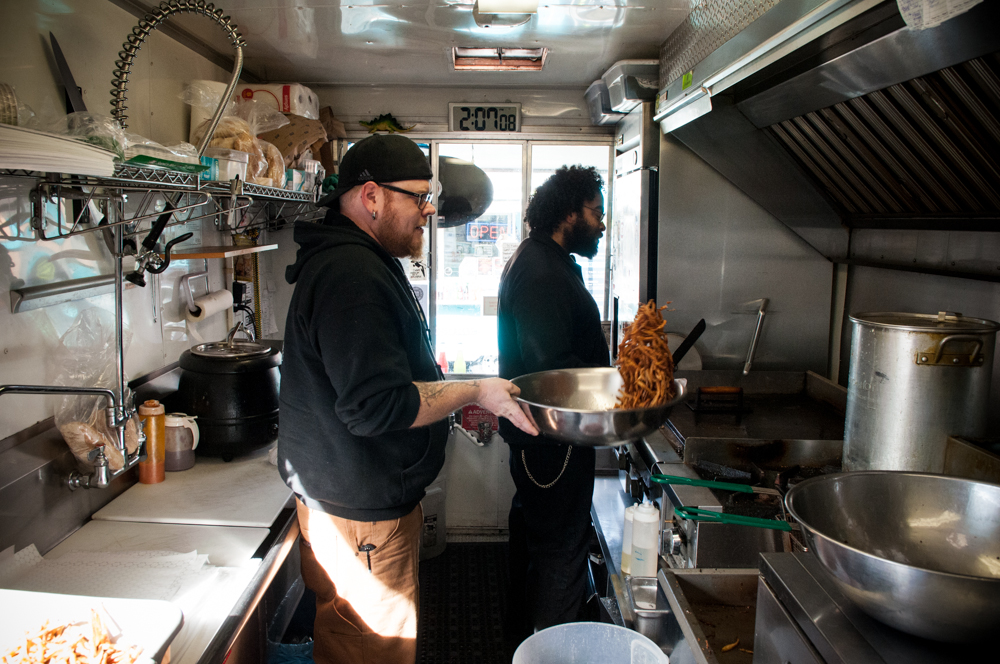 You get an order at the window: Walk us through what the next steps are — and how does the layout of the cart affect that?
An order comes in, goes up on the rail, whoever's working the grill will either grab what they need or ask the second to pass it over — it depends on how busy [we are and] how many people [are working]. We grill the meats/accoutrements, cook the fries, toast the bread, slather in cheese sauce, assemble, and wrap. Order goes up on the shelf, person up front hands it out. The layout is actually built just for that flow, we designed it alongside Northwest Mobile Kitchens.

If you could "wish list" one item to have room for inside the cart, what would it be?
A walk-in cooler. Or maybe a smoker. Or a broiler. It's really hard to pick one. Probably the walk-in.

Who is the most famous person to order from your window?
We've been pretty lucky in the word of mouth category. Most famous? Probably Patton Oswalt, but because of him, Brian Posehn came by and we were stoked to meet both of them. Patton wore our shirt on stage once and Posehn wound up performing at our two-year anniversary party, they're pretty rad guys. 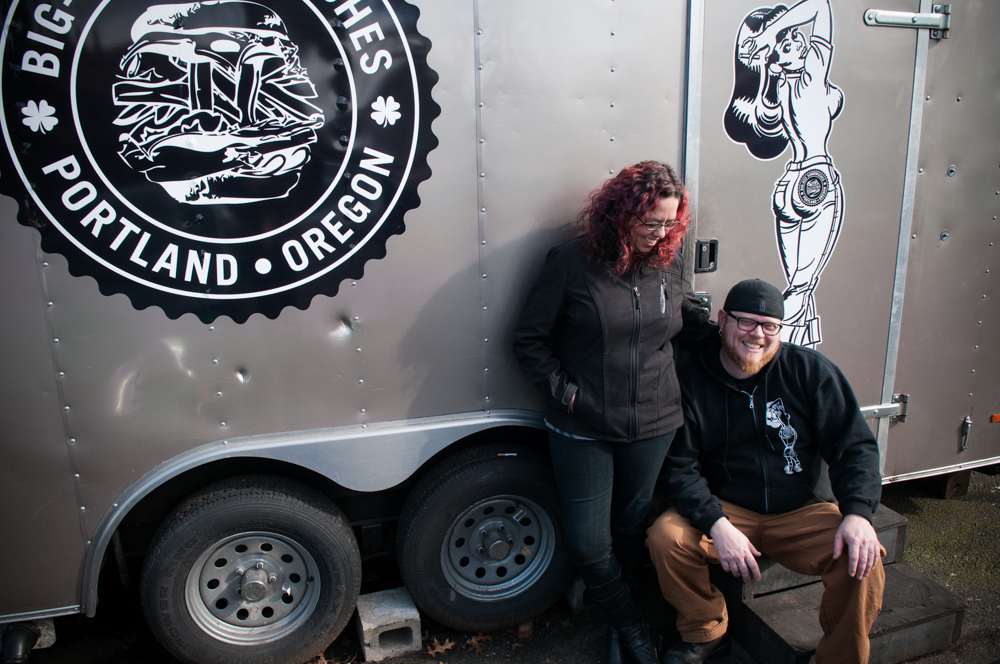 And finally, what's the weirdest thing you've ever witnessed out of your cart window?
Oh boy, you know we were in Old Town three years, right? This is one that we have hundreds to choose from. While we love our new spot, there's a special crazy about that block that we absolutely loved. We also saw firsthand how badly help and resources are needed for that community. Top three weirdest: 1. A woman who drove her car into the wall outside Big Pink. 2. [Once we] swung open the back door to find a guy laying on the ground with his hand down his pants. 3. Every day, a kid would come by, take the payphone off the receiver, slam it as hard as he could about 50 times, drop it and leave.
· Big-Ass Sandwiches [Official site]
· All Previous Big-Ass Sandwiches Coverage [Eater PDX]
· All Previous Food Cart Coverage [Eater PDX]