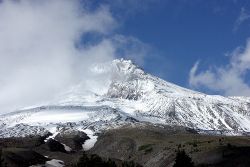 Sean Temple is the executive chef of wine country favorite, Paulée. After a career in finance, Sean attended the Florida Culinary Institute in West Palm Beach, Florida then moved to New York City, where he worked at Jean-Georges and was part of the core team that earned the restaurant its first three Michelin stars.

Temple relocated to Portland, working at Paley's Place and Alu before crossing paths with chef Daniel Mondok, and together they developed the vision of Paulée. Sean, named executive chef in December 2012, epitomizes Paulée's approach to French-inspired cuisine: well-executed but never pretentious. That's also how he likes to eat when he isn't in wine country. Such is the case with one of his faves, The Shack, located in the foothills of Mt. Hood.

The Shack Restaurant and Sports Bar out in Welches, in between Portland and Mt. Hood, is a perfect stop on the way back to town from the mountain. It seems for like the past few years I always have had Tuesdays off — and so would some other buddies who work in kitchens — and no matter the season, Taco Tuesdays at the Shack always makes sense. Two rounds of three tacos for $2.25 plus a couple of the coldest cans of beer pulled straight out of the ice (great selection of 12-ounce cans). This is a perfect place to help get rid of the burn in your legs from the powder. Always a good crowd on Tuesdays, great jukebox from Hank to Ween, plus pool and other pub games.