Welcome back to Behind Cart Doors, a new Eater feature that goes inside popular Portland food carts — literally — to see how kitchen set-ups work in those tiny cart spaces. 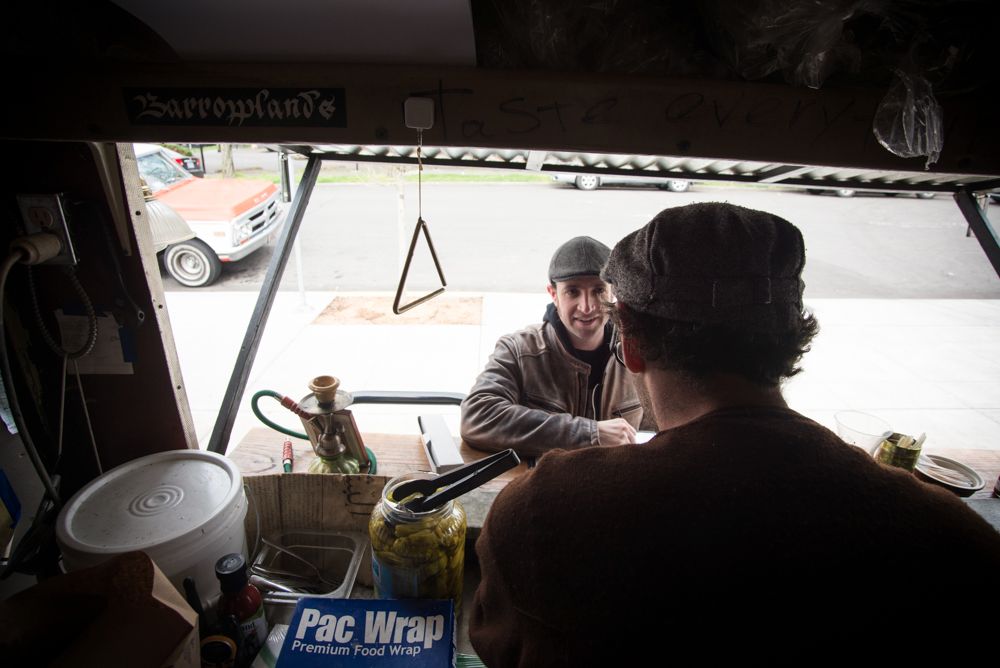 Tal Caspi opened Gonzo Falafel and Hummus with the intention of serving traditional artisan Middle Eastern food "influenced by the bounty of the Northwest." And that's what Caspi and his two employees have been doing for the last year in Southeast Portland. "My love of cooking and hatred for working for others pushed me to start my own business," says Caspi. "Also my friend was building [a cart] and moving out of town, so he offered me the cart. He wanted me to do vegan tacos, I said no, and the rest is history."

Caspi's first cart effort was One Hundred Miles on NE Alberta, which opened in the summer of 2011 (and closed that winter). "The concept was to use local ingredients to make international sandwiches," Caspi says. "Our overhead was high and the location did not do very well. I decided that I should make what I know. Growing up in Israel, I fell in love with the food and thought Portland might like a traditional take on Israeli street food." To that end, Gonzo's focus is on "Middle Eastern street food without short cuts... in essence slow, fast food. We make everything from scratch and we take our time doing it," says Caspi. 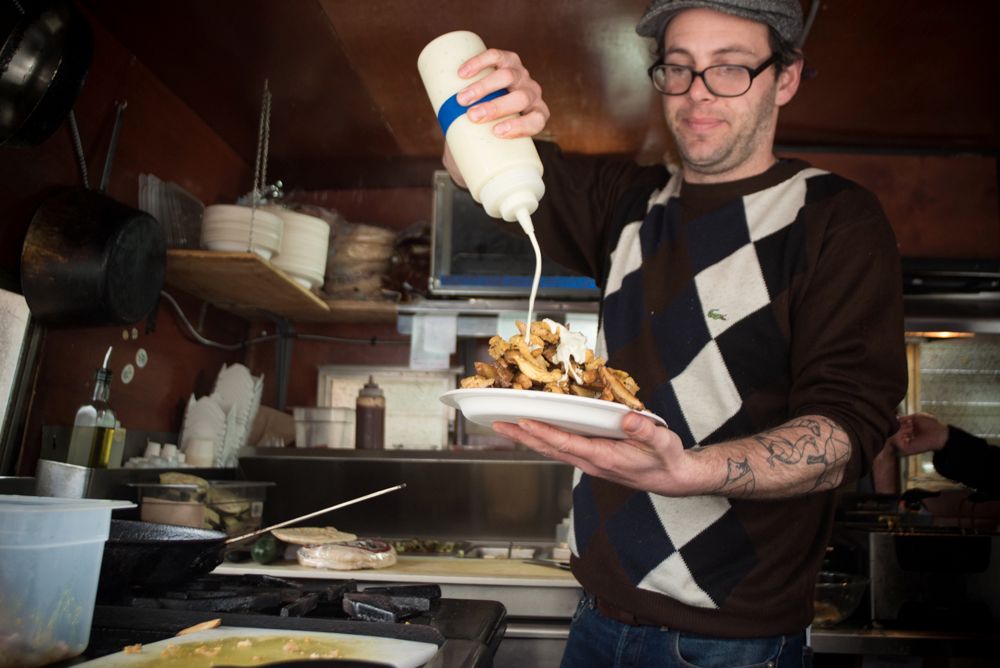 Originally located at the D-Street Noshery, on SE 32nd and Division, Caspi went in search of a new location after the lot was sold to a developer to make room for condos. "After having an amazing first summer we knew we needed to find a new home," says Caspi. "We had begun talks with Base Camp Brewery a few years ago and the timing was just right — they were ready to open and we needed a new home." Caspi says Base Camp offered them the opportunity to move closer to being a full fledged restaurant, offering table service and the ability to order from a bartender in Base Camp's beautiful taproom. Now, nearly 80 percent of his business gets delivered inside to the bar.

What's the size of your cart window that looks out onto the street?
6 feet by 3 feet.

How much prep/fridge space do you have, and how does that affect what you offer on your menu?
We have one Low Boy fridge and very little prep space in the cart. We rent a commissary kitchen space nearby. The amount of space we have dictates the size of the menu; we make many menu items out of the same ingredients.

What are the advantages/disadvantages of having limited space?
Not making many menu items allows us to really focus on the few that we have and nerding out on them. 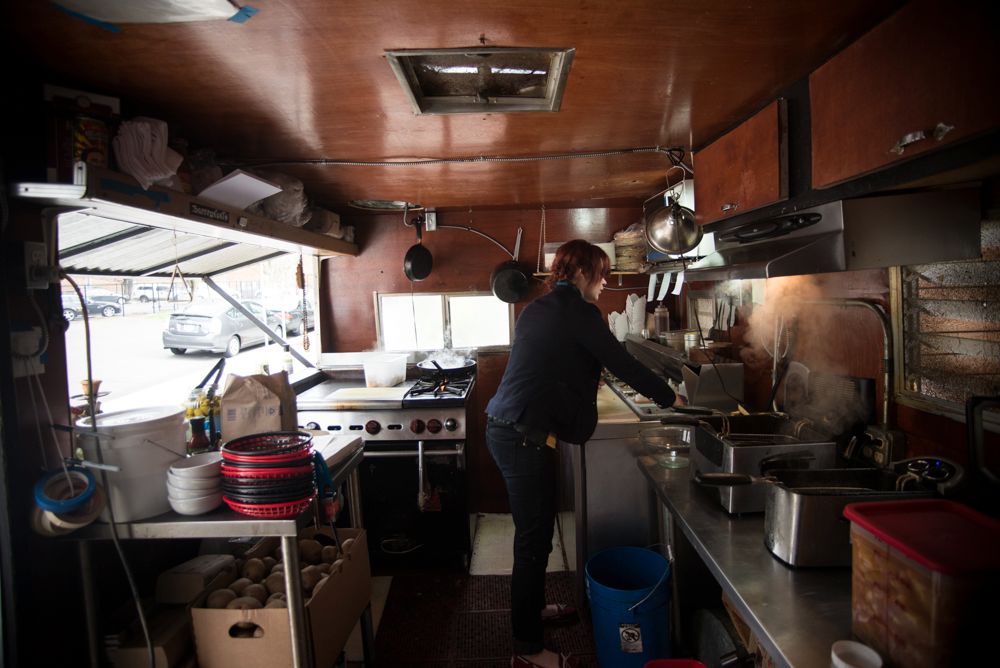 You get an order at the window: Walk us through what the next steps are. i.e., how are the cooking/assembling tasks divvied up, and again, how does the layout of the cart affect that?
The cart is set up for one person to run the flat top, burners and deli station, and another person to support. The layout is not great for high volume, so we are tweaking the layout this summer to be ready for the masses.

If you could "wish list" one item to have room for, what would it be?
An indoor coal grill. I dream of doing wood fire kabobs and shawarma. There are a few places left in the world that do coal fire shawarma, I think this idea might be too much of a fire hazard to do inside a cart, but fuck it, I'm willing to try.

Who is the most famous person to order from your window?
I served Mayor Sam Adams at other food carts I have worked at in the past. 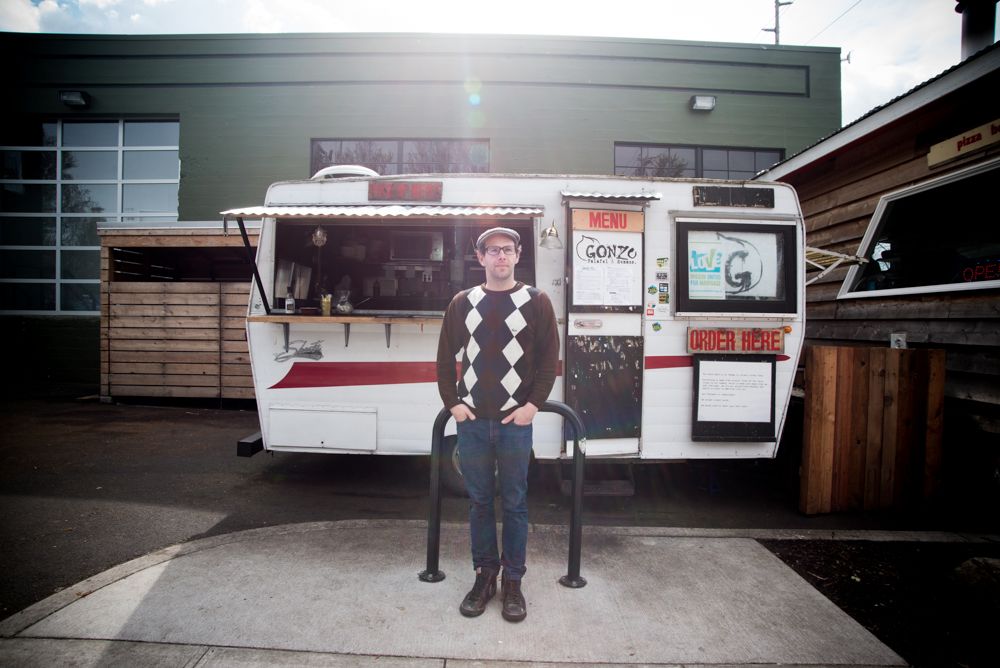 And finally, what's the weirdest thing you've witnessed out of your window?
We really haven't witnessed anything that crazy out the Gonzo window. But recently we catered another restaurants employee party, where everyone was extremely intoxicated to the degree that people asked us to help them locate their burritos (aka falafel sandwiches) and shawarma was eaten off of someone's cleavage.