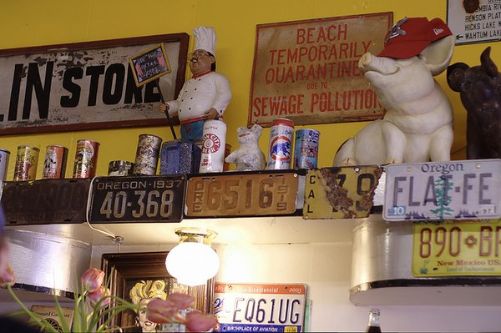 Urban Farmer's new pastry chef, Carrie Merrill, was born in Lisbon, Portugal and was raised in the small town of Monteagle, TN, just northwest of Chattanooga — but she's spent much time honing her baking skills around the world. Merrill's adventures took her to Red Lodge, England, where she began taking cake-decorating classes and was referred to as "the cake lady" around the town's military base. But Merrill soon discovered that although she liked cakes, she loved pastry even more — and her resume includes stints as pastry chef at L'Auberge de Sedona, the Greenbrier in West Virginia, and Las Vegas' Postrio and Wolfgang Puck's CUT. But Merrill relocated to Portland in November for her debut as pastry chef at downtown's Urban Farmer. For kicks you'll find Miller in Multonamh Village at Lucky Lab Pub or, for breakfast, at Fat City Cafe.

Fat City Cafe isn't for the calorie counter or for the morning when you want something light. It's total comfort food for the soul and for those times you aren't messin' around. I love breakfast and am a pancake junkie. They have the best! I usually order the pancakes with well-done hash browns but the biscuits and gravy aren't to be pushed aside. I grew up in a small town in SE Tennessee, and I know biscuits and gravy ? these are by far the best I've ever had. The place is super small so waiting isn't uncommon on weekends. There are so many signs on the walls that I find something I haven't noticed before every time I go! The friendly staff and the small town atmosphere make me feel right at home.