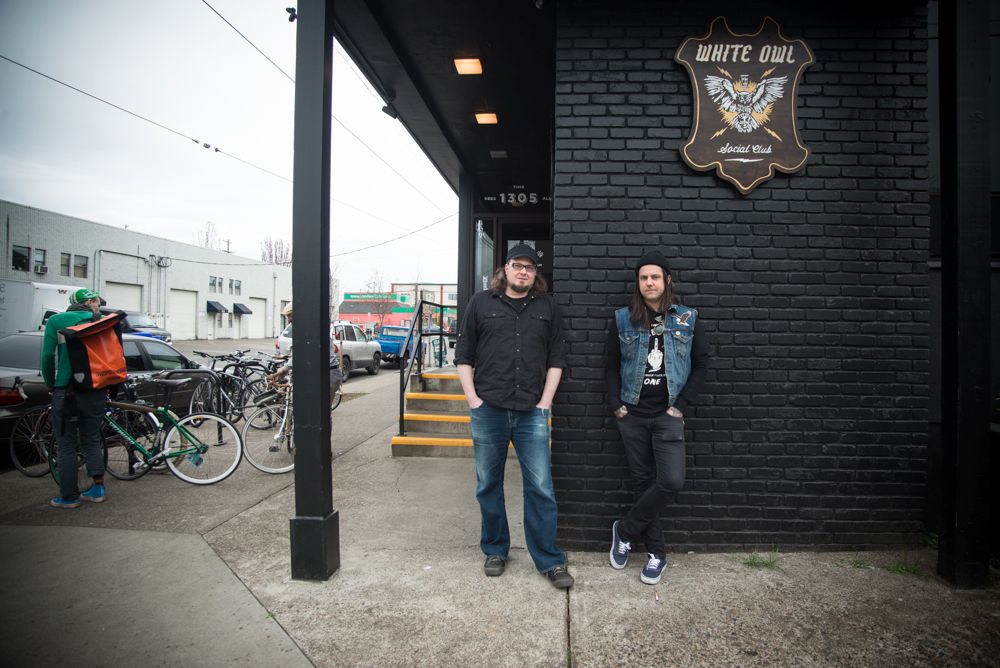 Music in most restaurants' dining rooms is so tame, palatable, and unconfrontational that it can barely cut through the clinking of forks. However, the playlists that are kept secret, behind the swinging kitchen doors, are a totally different animal. Raucous mixes of metal, punk, and rap are a storied staple of chefs. Talk to any cook or restaurateur in Portland, and you'll find that this stark divide between the kitchen and the dining room is practically universal.

Walk into Matt Jacobson and Mikey McKennedy's pizza joint Sizzle Pie, and you're going to hear what the cooks hear. And it's probably going to be metal, and it might even be loud. Jacobson maintains that the blast of Big Muffs and double-bass drums has long been integral to the culinary world. "It's not like we invented that combination, you know? We're just kind of celebrating it." However, their distinctive aesthetic decision never takes precedence over a slice of universally good pizza. "I'd say it's a big part of the personality," said Jacobson of Sizzle's rocker contingent. "But still, our pizza is for everyone." Here, Jacobson and McKennedy talk with Eater about the prevalence of rockers in the restaurant industry, hearing Mudhoney in the grocery store, and why "Fuck the Police" might not be appropriate for birthday party playlists.

At your East Burnside location, it seems that the music playing in the kitchen is the same as what's being played in the dining room. So to whom do you bestow the power to decide what's going to be played? It's not the typical dynamic, where the music is heavily curated in the dining room and then Wu-Tang in the kitchen.
MJ: Ha! It's just Wu-Tang everywhere. That's a good observation. It's really just the staff [picking out the music], but Mikey and I have curated the jukebox selection with some of our trusted management. So it just depends on whether someone's played the jukebox or whether an iPod is plugged in at that moment. But it's a pretty similar mix.
MM: And the staff definitely contributes. We don't hire people based on their music taste, but—
MJ: Ha!
MM: When we used to hire people we'd bring them on, and I'd say things like, "I don't want to know what your music taste is. Just hang out and listen to what we've got going on. If you've got something you want to contribute, awesome, but if you listen to like, Dave Matthews or Hootie and the Blowfish, I don't want to know 'cause it's going to affect how we interact. But if you do, just keep that to yourself, and just kind of deal with what we've got going on."

My next question was actually going to be about the metalhead contingent of the Sizzle Pie staff, and if music taste actually informs the hiring process.
MJ: It doesn't, but what ended up happening is when we first opened, we inevitably started with some of the people that we knew that Mikey had worked with, or that we knew from working at other places in town, and that were in our kind of circle to some degree. Then things kind of halo out from there, so when we needed someone else it would be like, "Oh, well I worked with someone else from this place and that guy's a good guy," et cetera.
MM: I mean, it's a circle, but also a lot of musicians work in the restaurant industry so it's not unheard of to get a lot of musicians working at a restaurant. And it just so happens that in the circles that we travel in, we just know a lot of metalheads that are also really proficient cooks or servers or whatever.
MJ: Plus, rockers are prevalent in Portland.

Yeah, when I was talking to Rick [Gencarelli], he was saying that a lot of the chefs in Lardo's kitchen are metalheads. I don't know why they get attracted to the kitchens!
MM: I think it's a whole world, and that's something that Sizzle Pie kind of highlights. It's a direct tie to all that stuff — pizza, metal — it's not like we invented that combination, you know? We're just kind of celebrating it.
MJ: That's a good way to put it. People get really excited about it. A lot of our pizzas and stuff have metal or musical or other cultural references — hardcore, punk, movies.

Is there an album or genre that particularly irks you when you walk into a restaurant? Something that's really trite and makes you want to leave?
MJ: Yeah, that can happen sometimes, but not that often. A lot of places I think go for really neutral mode with music, and it's really background, and I notice it but it has to be really bad from my perspective to have it be offensive to me. It can happen, though. On the flip side, I really like going to places in Portland and being pleasantly surprised by the music. Not long ago, I was in the grocery store and I heard Mudhoney playing, and I had to text my friends in some other parts of the country to ask, "Is Mudhoney playing in the grocery store because I'm in Portland? Or is this now what's in the grocery store everywhere?" I live in this bubble, and I wasn't sure. And my friend was like, "Yeah, I've never heard Mudhoney in the grocery store."
MM: It is weird when you start taking that stuff for granted. Like, "They don't play Mudhoney in your grocery store?"
MJ: I also once got into a taxicab in Portland and heard Dayglo Abortions. Where in the world are you going to hear an obscure Canadian hardcore band from the '80s in a taxicab? Portland. I love it.

So obviously you guys aren't trying to be in neutral mode with Sizzle Pie, because it's such an integral grain of the whole operation.
MJ: I'd say it's a big part of the personality, but still, our pizza is for everyone. We want everyone to feel welcome, and hopefully it'll be inviting to everyone. We recognize that there are certain times of day, like late on a Friday, certain people can't hack it. For the most part, I mean, we have families that come in.
MM: We're really upfront with our staff that our pizza's for everyone, and there are families that come and bring their kids in, and just to have an awareness of that. The families that typically come to Sizzle Pie and lower East Burnside are pretty rad and pretty punk rock, but at the same time, we don't want to be playing "Fuck the Police" by NWA to a busy Friday lunch crowd, you know?
MJ: So we try to have a balance. Sometimes you'll hear something sneak out, and we'll be like, "Oh, we have to skip this track 'cause there's a birthday party with little kids right now."

What kind of feedback do you get from diners?
MJ: When we first opened, we had a lot of negative Yelp reviews about the volume being too loud. My first assumption was, "They're just like, old, or sensitive to heavy metal" or whatever. But then we found out that during times we weren't there, the staff was maybe cranking it to a complete extreme. I've definitely seen Yelp reviews that have been glowing about the food but have made slightly negative comments about the metal aspect, but I appreciated that they didn't let it affect their take of the rest of the experience.
MM: I think it's a decision that you make, and we were very aware that when you stick with something like that, there are always going to be detractors that want to talk about the music rather than the food. But, at the end of the day we think our pizza's awesome, and we're glad people agree with us, and that's the most important thing. If we had crappy pizza and we were playing metal, that'd be one thing, but we're really stoked on our pizza and we're not afraid to take all the crap from anti-metalheads or whatever.
MJ: And we do play stuff besides metal.

I'm curious as to what that is.
MJ: Well, if you look at the jukebox, it's anything from the Cure—
MM: Tons of old punk. Lots of '90s punk and hardcore.
MJ: Little bit of rap. But it's skewed on the heavy rock and metal side. The flip side to what Mikey was saying, too, is that the people who are excited about the infusion of music in what we do are really excited about it. And that's something that travels. It's word of mouth.
MM: We've spent out entire lives in this music scene and in the restaurant and bar scene. If you go into any kitchen, they're probably playing something that's not being played out in the dining room. We were just like, "Fuck it, let's just play what we love to play." This is us.
MJ: We've caught wind of people literally all over the world chattering about "that metal pizza place in Portland, Oregon." And we get t-shirt orders from Portugal and Italy and Canada and the UK. It's pretty amazing.

For my final question, what can Eater readers expect to find on your Spotify playlist?
MJ: Hmmm, maybe some metal? But there'll be surprises in there. There might even be a couple Relapse releases.
· Sizzle Pie [Official site]
· All Previous Sizzle Pie Coverage [Eater PDX]
· All Previous On the Records [Eater PDX]