Share All sharing options for: Bollywood Theater's Troy MacLarty on the First Year 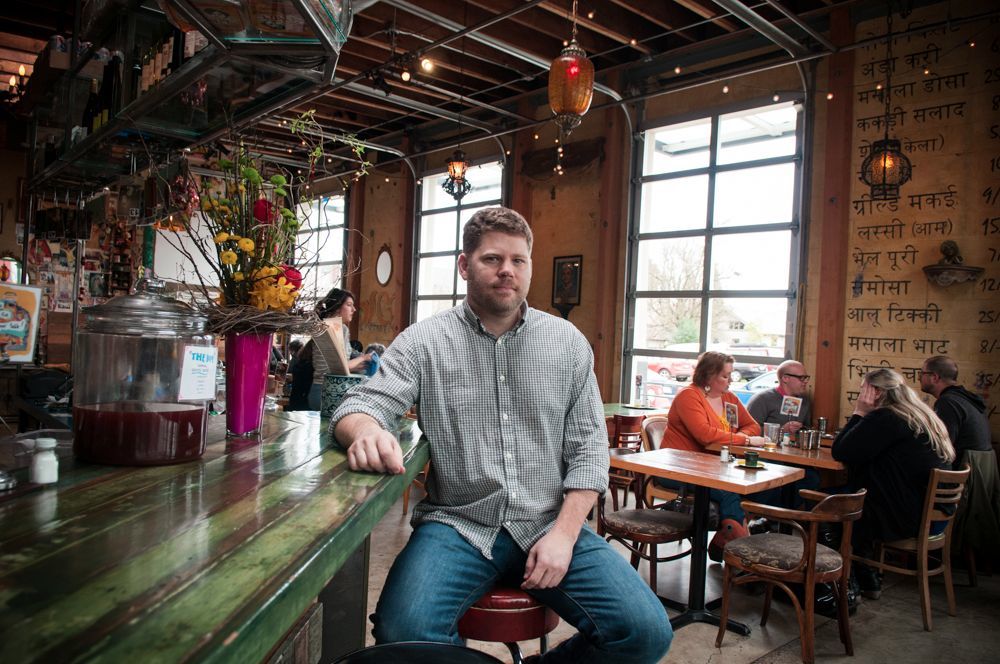 Last winter, when biologist-turned-chef and Chez Panisse alum Troy MacLarty (Family Supper, Lovely Hula Hands, Laurelhurst Market) lifted off the Portland tarmac en route to India for the first time, he'd just signed a lease — for the Alberta Street space that would house his soon-to-be wildly popular Indian restaurant, Bollywood Theater. Bollywood celebrates its first year anniversary this week, so Eater sat down with MacLarty to talk about white guys cooking Indian food, the counter service advantage, the agonies of Home Depot broom deliberation, why you won't see dosas on the menu, and the obvious reasons everyone should be so lucky as to have Salt & Straw as their next-door neighbor.

So what made you decide to open an Indian restaurant before you'd ever been to India?
Indian was the food I missed the most here in town, the food I kept going back to. For years I'd really hoped someone here would open an Indian restaurant that I wanted to go eat at, like the Indian food I'd eaten in Berkeley. There was a lot of street food and southern Indian food there. Before opening, I'd spent a year really working on cooking Indian food. We had a dinner party every Friday where we made Indian food, trying to figure out what would work for American palates and for a restaurant. I'm kind of a book guy, and I'd done a lot of research so [the trip to India] was more for affirmation. I wasn't necessarily going for recipes, it was more to taste things and get those flavors in my head, but more than anything it was to feel what India felt like and what it sounded like and what it smelled like. It's impossible to capture that completely, but I tried to capture as much as I possibly could in an interesting restaurant scene.

It all happened really quickly. I was kind of in talks with people to do another project, and it was at the point where I needed to pull the trigger on that, then I got a call from this building's leasing agent. I came and took a look and then it all happened so fast that it was really a blur, and it wasn't until I was in India that I had time to get really scared about it. I mean, I literally signed the lease on the way to the airport.

What made you choose this neighborhood, this particular building? Was it because it smells like Salt & Straw waffle cones?
I don't notice the smell anymore. When I was doing the build-out, out for three months that's all this place smelled like. For three months. It was brutal. I ate so much ice cream during the build-out.

Sounds terrible. Other than that, how did the build-out go?
It was mostly fun. I did a lot of the work myself. I worked with a company called Reworks, they are great, they are a design-build, so we collaborated quite a bit on the project. We set up the project in a way where they managed it, but I could do as much of the work as I was willing to do. And I had a lot of nervous energy. [...] It's funny? when you open a restaurant you kind of lose your mind. It's a really scary thing. You are playing with a lot of money, other people's money, and you don't take that lightly. So, you've spent all this money opening a restaurant and then you're at Home Depot and you're like, "this broom is $2.50 and this one is $2.55, is that broom worth five cents more than that broom?" It all gets really crazy.

How'd opening day go?
It was pretty chaotic. If I showed you a picture of the night before, you'd be shocked. Our place the night before looked how most places look about a month before they open. I was kicking myself because I thought we'd get open for lunch but we didn't so I was a little bit mad about that. A lot of places spend a month leading up to the opening cooking, and in my opinion it doesn't really do that much for you because the learning curve once you go live is so much greater, so our staff had very little time, maybe one day in the kitchen, before we opened, so the staff was scared. They were like, this guy we're working for is a nut job. The thing I didn't expect was how odd all the calls were, because they are all in Hindi, it was weird being in a kitchen and calling all these names of things that sound so foreign. On opening night there was a lot of "What was that?" "What is that called?" Thankfully it's the slowest day we've ever had; every day has been busier since. I thought we served good food for the most part, and then, we stayed up all night cooking again for the next day. It was a very surreal experience, I kept looking out into the room and thinking, "how did this happen?"

How was the reception?
The first month we were open, we joked about making t-shirts that answered the five questions that every Indian customer would ask me. They all wanted to talk to me. I think they just were kind of in shock that we'd done this, that we were white guys. They would look in the kitchen really strangely, and ask the same five questions, "when did I live in India, where did I go in India, how long was I in India, what did I eat in India, what were my favorite foods?" I knew we were doing something right when our Indian customers always assumed I'd lived in India. At first it was really intimidating and overwhelming for me because I'm kind of shy. And I wasn't sure we were really doing the right things. I felt good about our approach, we've always been really honest about who we are and what we're trying to make, but you don't know whether you're doing food the way it should be done.

We got quite a bit of very specific feedback early on from our Indian clientele. It was funny — Westerners were generally really focused on the spice level of everything, but Indians were generally not focused on that... they mostly saw it as an opportunity to have dishes they remember from when they were kids. They were always asking me to serve certain things and they would give me recipes, and say "I grew up eating this." That was really special. A lot of things people have asked us to make are dishes I'd love to do but we physically can't. I spent a lot of time figuring dosas out, but we can't physically so dosas because we don't have the space. We sell about 250 flatbread a day, but we have a four-foot griddle so there's just no way dosas could happen.

How authentic do you think Bollywood is?
More than most. A lot of people complain that we're not authentic and the things they complain about are not actually things that worry me. Like we hear a lot that we don't have naan, but 90 percent of India doesn't have naan either. So what people know as authentic is one very specific style of Indian food from one specific region... most comes from far in the north and it's specific, similar dishes, so I made a conscious decision to do something different. [...] Like, vada pav is not something you see on any menu in Portland, and it is the biggest selling item in India. They sell millions of them every day on the street. For our Indian clientele, the vada pav tends to be their favorite item, because it's something you don't see everywhere and definitely something they remember from childhood. We have some people who drive down from Seattle pretty often and take 30 to go back up there with them.

So it's really hard to say what is authentic and what isn't. Obviously I'm going to put everything I do through the prism of my experience, and we have different ingredients here. So authenticity is sort of a tough one for us. If our restaurant had been opened by Indian-Americans it would be judged differently by certain people, and I'm okay with that. I'm cooking to make myself happy, but honestly, we can't make everybody happy. You try to make everybody happy, and you end up being Applebee's.

You opted for a casual, counter service concept. How has that worked?
I don't think I'll ever do anything but that. Honestly. It gives us a lot of advantages. I come from a much finer dining background, and I really liked the challenge of trying to do food as well as restaurants that are sit down. I think the most we've sold in a day is nearly 1,000 plates, and if we're sit-down we're going to do half that. It cuts 15 minutes out of the front and back end of every single table, so we can have roughly 350 tables in a day. If we were a sit-down restaurant, we couldn't do half that. And because we can do that kind of turnover and volume, we can charge a lot less money and we can keep the food quality where we want it to be.

Does it feel like it's been a year?
In some ways. And in some ways it feels like a week. There are just so many things that at the start, I said I needed to do, but still haven't quite gotten to them. We got so busy so fast that things got put on hold, as it became about getting the food out. So there are so many things we're really just starting on. Like? Like accounting. Like the big scary box full of receipts. [Laughs]

Oh, that.
Everything happened so fast, we were just hanging on for dear life. We haven't changed the menu nearly as much as I'd originally planned, and I plan on doing more seasonal dishes. In my background, menus changed every day, food was really hyper-seasonal, I had very good, close relationships with farmers, and some of that fell behind a bit, so I'm looking forward to doing all that this year.
· Bollywood Theater [Official site]
· All Previous Bollywood Theater Coverage [Eater PDX]
· All Previous One Year In Coverage [Eater PDX]