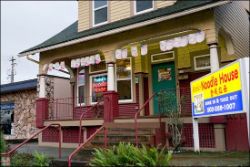 Prior to joining Genoa's staff, first as chef de cuisine and now as executive chef, Jake Martin worked at Seattle's acclaimed How to Cook a Wolf for owner and mentor Ethan Stowell. (Before his brief move to Seattle, Martin worked at ambitious — but now defunct — Portland spots Fenouil and Central.) It was at Central that Martin found one of his favorite noodle houses, Frank's in Northeast Portland.

Back when I was running the kitchen at Central, my special lady Jamie brought me by some salt and pepper squid from Frank's Noodle House. They were about an hour-old in a box, but they were amazing! I've gone back to Franks several times to have the squid fresh and hot, making a terrific treat hit new heights of awesome. The kitchen at Genoa now swears by both the pork noodles and the squid. It's the perfect meal for the middle of the day, not too filling but crazy satisfying. Especially with an icy beer. Get there early because the place is no secret sadly. There is usually a wait but its worth it. In my opinion, the best meal for the price! Plus free soup.