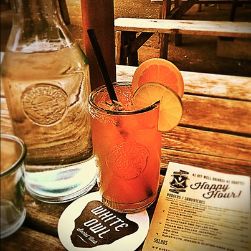 Growing up in a fishing and hunting family gave Riffle NW's bar manager, Brandon Josie, an early appreciation of where food comes from. His attention to detail and affinity for classic cocktails — he loves a traditional old fashioned – influence his style of crafting a cocktail. But where does Josie himself go when he's in the mood to get happy — as in "happy hour"? Josie heads to Southeast Portland and the White Owl Social Club for some sun and some good drinks and eats.

The White Owl Social Club is that garage that your friend's Testament cover band used to jam in, if, like, the stoner dude that lived in the basement was there making everyone awesome pulled pork sandwiches but still accommodating that vegan girl you used to have a crush on. So, it's awesome is what I'm trying to say. Go during Happy Hour and on a sunny day. The patio is where it's at. This is a bar first, so order a $2 or $3 (I forget happy hour pricing after a couple) pint of something awesome, local and stronger than you think. The food is sorted by method of delivery; one-handed (sliders), two-handed (sandwiches), spoon and fork. I'm not from the south, but the Blackstrap Pulled Pork is where it's at, and perfect with a beer. Also go for the chili; meat heavy and in the golden spot of just right on the Scoville scale. Throw on a side salad with pistachio vin for a buck during happy hour, and you're sitting pretty. If you are not of the meat persuasion, they have veg and vegan options and substitutions that I imagine will score well with you.