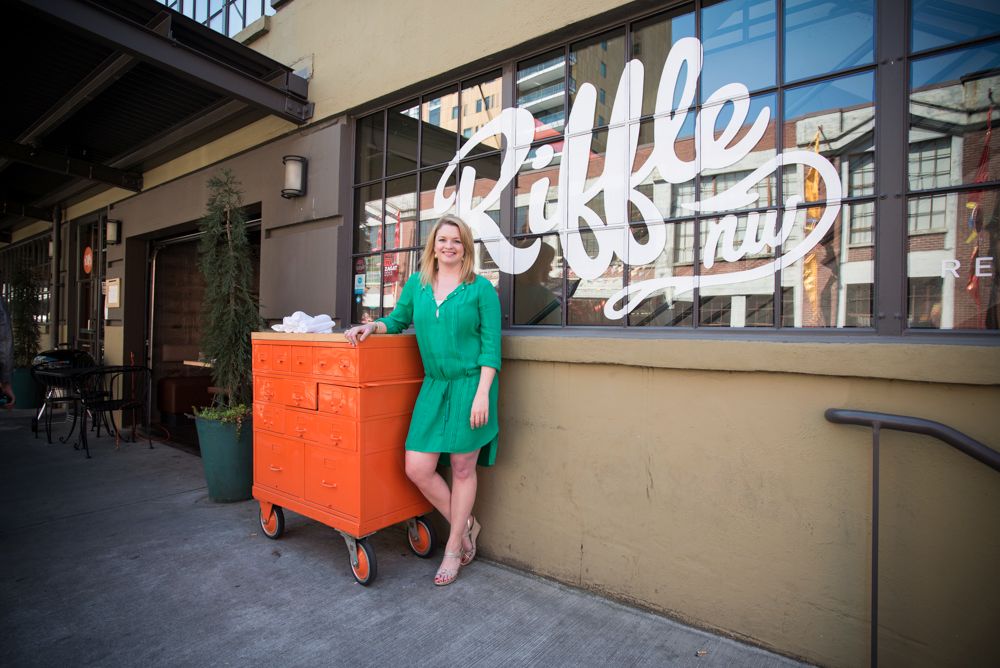 In February 2011, partners Ken Norris and Jennifer Quist moved to Portland from New York City specifically to open a seafood restaurant, and more than a year later, their goal was realized with the debut of Riffle NW in May 2012. Last week's news of Norris's departure nearly coincided with the Pearl District restaurant's one-year anniversary, which it officially celebrates this Wednesday. Eater caught up with Quist to talk about the ongoing chef transition, the restaurant's early work to secure sustainable product, and catching up to diners' expectations (a.k.a. why raw oysters now come with lemon wedges).

Let's talk about the chef change and the search for a new executive chef.
It's been an ongoing transition. As far as the kitchen's concerned, they've certainly found their footing. I think anyone who is in a restaurant understands that yes, the executive chef is so important and such a leader, but your cooks in the kitchen are really working hard back there, every day. And most of them have been with us since the beginning; it's a really cohesive team back there. [But] we're looking. So I've been forming relationships in the Bay Area, in Portland, in Seattle, and have some really fun prospects. We're looking for sure.

Since Ken's departure, have there been any changes to the menu?
It's really interesting when people have asked me that, people who have noticed Ken hasn't been here — we built this together. I have a background as a chef, as well, and I've done the menu with him since day one. And so, really nothing is changing. It's stayed the same; we still have our favorites on the menu, our branzino, our octopus, our sole, and what we're continuing to do is bring different seafood to Portland and be catch-inspired. That won't change, because that's what's important here. It comes down to sustainability and really giving our customers the best product possible.

How did you personally become interested in sustainable seafood?
I grew up in San Francisco, I went to college in Seattle. I'm used to seafood towns. And a lot of my family is in Portland, and I've never heard of them talking about a seafood restaurant. So I started to do my research and realized there's great seafood on all of the best menus in town, but no one is really putting their full restaurant behind it. So Ken and I started really trying to develop that. I grew up fly fishing; Ken's a fly fisherman as well. It just evolved... and once we got out here and realized how hard it is to get really good product into this town from our coast — we always have the sustainable seafood thing in mind just because that's the direction we should all be going in, regardless, these days — but when we started seeing what was available and it wasn't what we wanted to put in our restaurant, we had to really shift our thinking. ? Again, [sustainably] is how we should all be eating anyway. And the more you work with fishermen, the more you talk to people, you realize how important it is for our existence and the way we eat seafood and what's going on in the ocean. It just becomes easy as a part of what you're trying to to with your restaurant.

So tell me about those early conversations you had with fishermen and purveyors. What was the response on their end?
Really surprised. Everyone from purveyors to other chefs in town, I think everyone thought we were a little nuts. And we really didn't understand why. We were like, "The coast is right there. So why are we crazy?" And once we started to understand that we could get our hands on great halibut or salmon but it really stopped there, unless we wanted to bring things in frozen, we started to understand why we were totally crazy to do this. For Ken, he was really working with the fishermen and the purveyors, it became a whole other job. So not only was he running a kitchen and we were opening a restaurant, it became a completely separate job of pounding the pavement, and having these conversations. [?] Octopus was a really big thing for us. Most people [source] Spanish day-boat octopus, and it was bycatch up north, in the Puget Sound area. And we're like, "We'll take that. We'll use that. We'll be more local with that product." It was having those discussions, like, "What's out there? We need other things." Sole was one also. That was a bycatch situation, because people weren't really bringing it into Portland. We really wanted it on our menu. And now it's a staple.

How long did it take for fishermen to get it, to form those relationships?
Looking back, I think us not finding a space — we went through about five — was really a blessing in disguise, so we could create those relationships before opening. They definitely grew after we opened, but that time allowed us to create those relationships, figure out who the people were, and who the right people were to talk to. It also let us become immersed in Portland a little bit more, not just moving out here from New York and [immediately] opening a restaurant. We understood the culture so much more after that year.

Yeah, tell me about how you found this location.
We were looking only on the west side. NW 23rd was actually where we were originally supposed to be, and that was actually the space we thought we had when we moved from New York. It was the Roses space, where Bamboo [Sushi NW] is now. And then we hung out in that area for a while, looked all up and down 23rd, then we realized, "Let's start looking at second-generation restaurants, so we can get it done faster." So, we took a long look at the Pinot space; that did not happen. And then two weeks later, [a friend] saw on Eater that [50 Plates] was closed, and Ken ran down, literally, after I got the text. And this was awesome, because we'd looked at so many second-generation restaurants, and when you go in, it's really depressing — there's still orders sitting there, and it's really sad. And this place, Joe Rapaport, the owner, was really ready to move onto his next phase. It was great, because there wasn't any sadness, there wasn't any tension. So it all felt right. It wasn't this depressing 'get,' that you just got this restaurant that went out of business.

How did build-out go?
It was great. Again, having that year to prepare? this vision had really found its way to us by the time we started to build this space out. So it was really easy to put it all together. And we'd been through so many spaces and we'd been through so many drawings, we knew the key components. We wanted a chef's counter, a raw bar, we wanted something that was a semiprivate or private dining room. It was a pretty simple process, and we were all on the same page. [One funny thing is that] we have these action figures — they're little army guys. 50 Plates had them everywhere — it was an inside thing [with their staff] — but during build-out we found probably 50, and they would be in the most random places. Our plumber would be like, "I found another one." It was really funny. We saved one. It's over by the bar.

Do you remember opening night?
I do. We had a week of soft openings, so that was good. We had and still have such a great group of people, and I think we did some pretty good training leading up to it. So it wasn't as frenzied as I'd thought it'd be. The first friends and family night was a little nuts. That was kind of crazy. But people were so forgiving and awesome about it — for the first six months, people just want to tell you things. So, if you just listen, you're good. If you take in what they're saying and their criticism, you're good. it feels a little less crazy when you do that.

At what point did things start to feel really comfortable?
Not too far in. It's just that every day's a new day. But I think we got it down relatively fast. We've also been really open to adjustments along the way to make it better. Timing's always been really interesting in this restaurant, because seafood is though. Everything is a la minute. It takes serious finesse to get that fish cooked perfectly. So that's something that's been really interesting, with us trying to find the balance of timing in here. So, encouraging people to have a first course, and explaining to them the delicacy of their meal. Even if it's fish tacos, it's still happening at that moment. That's probably been our biggest learning process, how to handle that.

Let's talk about diner expectations. When people heard "seafood restaurant," was there a tendency to think fish-and-chips and tartar sauce?
That happened a lot in the beginning. It doesn't happen as much anymore, which is really interesting. And we dealt with it. We would suggest that that wasn't necessarily what they needed to do to make the dish better, but we would never say no to it. But I think a lot of the time people are used to eating fish that's covered up in sauces, and I think that our servers do a really great job of communicating to the tables that we like to keep things as simple as possible here, because we want you to actually taste the fish that's on the plate. And we try to keep things as clean and simple for that reason, because the produce that we're getting is so outstanding. But we'll roll with it. Lemon was a really big thing — everyone wanted lemon, like lemon with their oysters. Now we put lemon on every single oyster, because it's like, "Okay let's just do it." You've gotta listen.

Does it feel like it's been a year?
Yeah, it does. It feels good, though. With the transition, it has you taking a really long hard look at everything's that's gone on, and [ask yourself] what can you do better, and what can you do different. And this group of people I have in here every day really is like a family? and we now look back on this year and are just so excited that we've made it, and are so looking forward to the next year, and all the years after. It's such a great group of people that we're going into year two feeling like we're all on the same page, and we all feel really good about what we're doing. In the last six months up until now, it just, more and more, feels really good. The energy is really great. It's a fun place to be right now.
· Riffle NW [Official site]
· All Previous Riffle NW Coverage [Eater PDX]