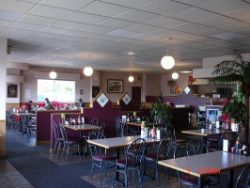 Chef Thomas Dunklin has more than 20 years of cooking experience under his belt, from his hometown of New Orleans all the way to New Mexico — not to mention stints in Seattle, San Diego, and San Francisco. In Portland, he once was the executive chef at Red Star Tavern, but after 10 years in the Pacific Northwest, chef Dunklin longed for the East Coast and joined the team at B&O American Brasserie in December 2010. Now's he back in town as the new executive chef of RiverPlace's Three Degrees. And Thomas is also back to checking out some of his favorite places to grab a bite, including Northeast's Pho Vinh.

Pho Vinh is a super-small Vietnamese restaurant located in Northeast Portland. I was lucky to hear of this place from a past coworker. The restaurant specialty is pho and the best thing on Pho Vinh's menu is their spicy beef noodle soup. Other items that are unique and tasty are the grilled pork skin, pork spring rolls, fish cakes, and the house pho which consists of brisket, tendon, eye of round, and meatball in a rich, spiced broth. And, when it comes to any of their phos, spring for the large size, they are only fifty cents more. The service is simple and quick. They usually only have one person for the entire space, but they seem to handle it just fine. Nothing fancy here, just good, traditional food.

One Killed, Two Others Injured in a Shooting at a Northwest Portland Pizzeria and Bar