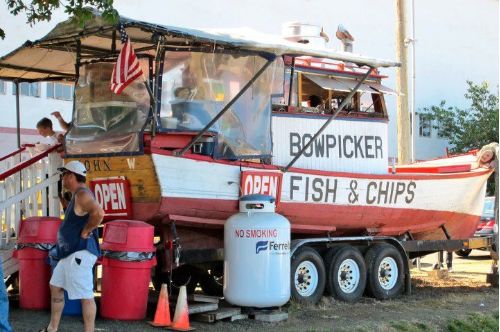 Kim Malek's "farm to cone" company Salt & Straw, which she runs with head ice cream maker Tyler Malek, embodies the Malek's passions about Oregon through its collaborations with local companies like Stumptown Coffee, HolyKakow, and Olympic Provisions. But when she isn't serving up sustainable scoops, Malek likes to take to the road. Trouble is, due to daily demands — sun + ice cream = busy business — Kim can't travel too far out of town. Luckily, one of her favorite day trips is down the Columbia River, to Astoria, Ore., where she loads up on fresh tuna on the bow of a dry-docked "boat" — a.k.a. Bowpicker Fish & Chips.

Since I've been back in Portland for the past several years starting up Salt & Straw, I haven't been able to get out of town very much (to say the least!). But lately I've been sneaking away to the Oregon coast for a little break from time-to-time, and one of my favorite places to visit is Astoria. I've developed a Pavlovian response on my way there just thinking of Bowpicker Fish & Chips. Their menu is pretty straightforward. Fish and chips. Whole order or half order. Sodas. That's it. But it's albacore tuna, lightly beer battered and fried just perfectly. It's made fresh to order — crispy with a flaky interior. Sprinkle on a little malt vinegar and dip it in the homemade tartar sauce. This place is an old Bowpicker fishing boat that they pulled out of the water and converted into a walk-up food boat. They're frying up fish as quickly as they can until they run out. So go early!