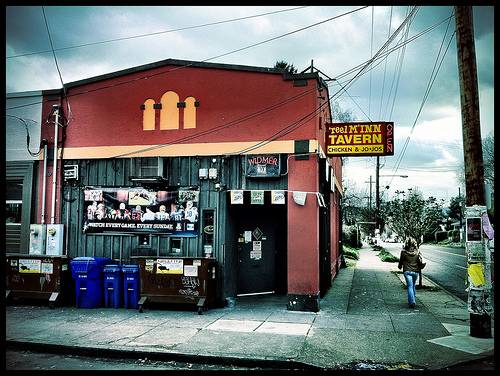 Chad Draizin is one of the pioneers of Portland's recent ice cream renaissance. He is the owner of Fifty Licks, an innovative ice cream company that consists of two food carts and a scoop shop that will open in late summer on SE Clinton St. Born in South Florida, he moved to Portland in 2002 to pursue a career in brewing, but ultimately fell in love with the art and science of making ice cream. Lucky for Portland. Here, he gives props to his go-to neighborhood greasy spoon — in the form of iconic dive bar Reel M Inn.

I'd driven by it every day for years, that dingy red and yellow sign on SE Division St. that says 'reel M' INN TAVERN CHICKEN & JO*JOS, and I'd heard my friends in the mo-ped gang talk fondly about it, but until recently I'd never wandered inside. I had my reasons: the rumor (untrue) that they serve "pudding shots", and mainly that it is the sort of dive that I loved when I was in my early twenties, but I just don't frequent that often these days. That was until on a fateful night when my stomach insisted that it had a particular kind of hunger and wouldn't stop until it got what it wants. It said to me: "I want fried chicken." And so, stomach first, I walked through the heavy door and up to the sticky bar.

The reel 'M' inn is staffed by one understandably-cranky, super-employee. She takes the orders, pours the drinks (a surprisingly well-curated selection of micros), busses the tables, bounces the assholes, consoles the broken-hearted, and fries the chicken. As you might imagine it takes a little while to get your food. Please do not ask her how much longer it will be; have another beer and wait patiently. The one tiny frier can only cook so much.

The portions are huge. One order is more than enough to absorb a long evening's worth of Lagunitas and Double Mountain. The giant jo jos are lightly breaded, perfectly fried, and amount to essentially one quarter of a russet potato each. The fried chicken is the real star here. The skin is crispy and both white meat and dark meat are astonishingly flavorful and juicy. I seriously don't know how they do it and I seriously don't know why I waited this long to eat it.