Line Cook Jan Miller on 25 Years at the Hotcake House

Share All sharing options for: Line Cook Jan Miller on 25 Years at the Hotcake House

Welcome to Lifers, a feature in which Eater interviews the men and women who have worked in the restaurant and bar industry for the better part of their lives, sharing their stories and more. 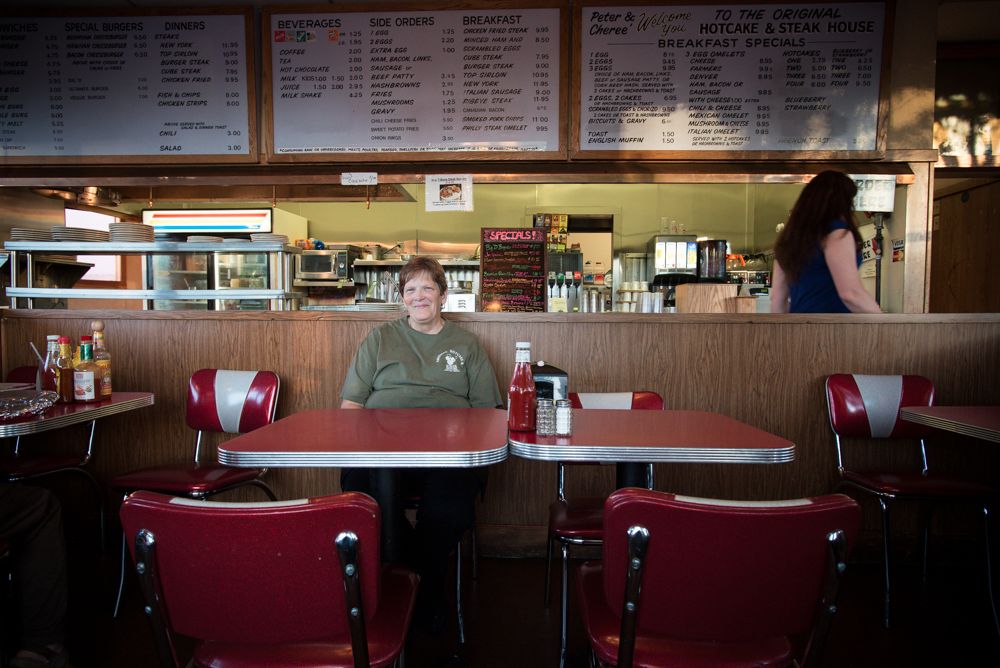 It was 1988 when Jan Miller started working at Hotcake House, the 24-hour, yellow and turquoise diner that stands in infamy on SE Powell. According to Miller, a born-and-raised Portlander who started dishwashing during graveyard shifts, things were simpler back then. That is to say, she didn't experience the automatic weapons and belligerent urchins that regularly make appearances at Hotcake House today.

A combination of factors account for why Jan continues to flip hotcakes at the House: one is her switch to a much tamer daytime shift in 1994, and the other is her love of Hotcake House's customers and employees, young and old. Eater caught up with Jan in the Hotcake House dining room, where she gave the low-down on the graveyard shift, the trouble with steaks, and the regulars who know her by name — just don't ask her what their names are.

Give me a brief history of how you got started working here.
Well, my sister used to work here and she told me they were hiring, so I came down and started washing dishes, and that was about it.

Are you originally from Portland?
Yeah. I grew up over here on 13th and Haig, just down the street.

How long were you washing dishes before you were actually cooking?
I was on graveyard for at least six years, and then I started cooking on swing, 3 to 11p.m.

What does a typical day look like for you when you get here?
During the summertime it's kind of slow, when it's still nice out. But anytime it rains or it's wintertime, it's kind of steady, and we have more of a dinner rush.

What do you end up cooking the most?
Lot of hamburgers.

Even more than hotcakes?
I'd say it's about even. You've got young kids who want the hamburgers, who want dinner instead of breakfast for dinner.

What's your favorite dish on the menu to make?
I like to make the chicken fried steak and the omelettes. I hate doing the steak-steaks: 'cause if you screw up, you're out $15.

What's your favorite thing to eat here?
We have one meal per shift. It used to be that we would have a full breakfast, but now it got expensive and you have to pay for your meat if you want, say, a side of bacon. But you can always eat whatever you want. Most of the time it's something quick, like a hamburger, 'cause it's just two people [working the kitchen]. Usually it's a hamburger, sometimes with one hotcake.

Do you ever cook for yourself at home?
I cook dinner, that's about it. I'll cook potatoes for breakfast sometimes. Other than that, no.

For you, what is unique about this restaurant?
I think because you get to stand there and watch you cook the food, and then either somebody else takes it out or you even take it out to the person who's ordered it.

In your time here, you must have some pretty wild stories, especially considering it's a 24-hour restaurant, so I was wondering if you could tell me the most memorable scene you've seen at Hotcake House.
When I was on graveyard I would see fights, but nothing like they are now. On graveyard now, they're trying to get people out the door. I have friends that have had bikes in here and stuff like that, but that's about it. And for me, nobody walked in with a big shotgun like they did on graveyard one time. Apparently he was mentally disturbed and came in here with a rifle. My niece told me this; she used to work graveyard.

And what role do you think Hotcake House plays in Portland?
Well, since it's 24 hours, there's a lot of people that come from all over. Everybody either has been here or knows somebody that's been here, and they just keep coming back.

What do you like most about working here?
The people, and the people I work with. We have a lot of people that have come in for years and years. They're more friendly on swing shift than they are on graveyard. They're not like on graveyard, where they're kind of on the tipsy side. They're in a hurry.

So who are your favorite customers here?
Most of them. These guys [points to elderly couple at adjacent table] have been coming here for a long time. They waited outside for a half hour while I got on shift. I don't know half their names; I don't know their [points to couple] names, but they've been coming here for years. Lots of families with kids that have grown up. Other than that it's just all the same people. They all know my name, but I have no idea what their names are.
· Hotcake House [Official site]
· All Greasy Spoons Week Coverage [Eater PDX]