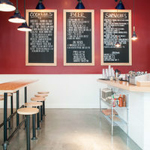 As previously reported, ChefStable's Kurt Huffman is expanding the CS empire to Seattle via a joint venture steakhouse with Chef Jason Wills of Crush acclaim. More details have been revealed on Eater's sister site in Seattle: Taking cues from Huffman's wildly successful Ox, Miller's Guild will offer meaty dishes cooked on an Infierno wood-fired grill. With Huffman dipping his toes in the Seattle market, Seattleites will eventually be christened Portland proper with (possibly) a Lardo on the horizon. According to Huffman, "We do have a sandwich concept in Portland that I think could go all over the country called Lardo. I'm thinking of bringing it up to Seattle once we get a foothold here." [Eater Seattle] Image of Lardo courtesy Avila/EPDX