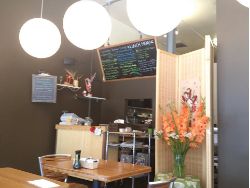 Ingrid Chen is the executive chef at the Pearl's newish spot Remedy Wine Bar. Even though she loves Taiwanese food and recognizes its positive influence from her childhood, Chen's first cooking experiences occurred when she wanted to break away from her family's Taiwanese food traditions. As a result, she started cooking up macaroni and cheese and other "non-Taiwanese" dishes at the early age of eight. While attending culinary school, a position to work under pastry chef Jeff McCarthy at Portland's Ten 01 restaurant opened up. She seized the opportunity, and has since worked at other top Portland restaurants including Clyde Common, Olympic Provisions, Brasserie Montmartre, and Aviary, before opening Remedy earlier this summer. When Chen isn't at Remedy, you might find her near PSU at one of her favorite places, Chef Naoko Bento Cafe.

When I'm not working, I basically want to eat Asian food all the time. I grew up in North Carolina but ate Taiwanese food every day, and I never took the time to properly learn my mom's Taiwanese dishes. I try to wing it at home now, and it's never as good as my mom's. So now I crave Asian food constantly, and bento is one of my guilty pleasures. One week a few months ago I went on kind of a bento bender, trying a bunch of bento places I hadn't yet tried in Portland, and I stumbled upon Chef Naoko's Bento Cafe, on SW Jefferson and 13th near PSU. She makes the best bento in town, as far as I'm concerned. The cafe is a tiny space with a handful of tables, and chef Naoko herself takes orders and cooks with a small staff. She's so incredibly nice, and the bento is unbelievably good.

I like to get whatever bento is on the daily specials board, and it's constantly changing according to what local fish or vegetables are in season. She uses all natural ingredients and sources everything from local farms like Gathering Together and Ayers Creek. She goes to the farmer's market down the street with a Radio-Flyer-style wagon and hauls cases of vegetables back to the restaurant! I love the attention to detail in the bento too - the garnish on the salad, the killer pickles, the goma-ae, the sweet tofu, and the perfectly cooked tamago... It's just heavenly. She does simple donburis too that are great and perfectly filling. You can just tell she really puts a lot of love into her food. The only downside is they're only open for lunch, but last I heard she's looking to open for dinner really soon.