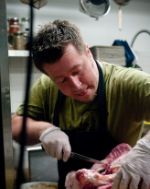 After a four-year tenure, chef Chris Carriker is no longer in the kitchen at Old Town's Gilt Club. Carriker confirms the exit, saying that the restaurant — made infamous thanks to a certain Portlandia appearance and Carriker's carnivorous menu — is looking to "make [the menu] a little simpler" moving forward. According to its official website, former sous chef Neil Everett has stepped into the executive chef role. [EaterWire]