Share All sharing options for: Tails & Trotters's Aaron Silverman a 'Nut' for Cedo's 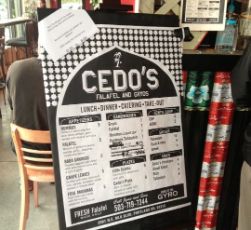 Aaron Silverman's first farming experience was as the manager of an educational farmyard at Shelburne Farms in Vermont. There, he taught children and adults the art of milking a cow by hand and managing an assembly of farm animals. Upon moving to Oregon, he successfully established one of the first organic farms to supply Oregon restaurants — a farm that is still in operation 17 years later.

In 2004, Aaron was sent to Turin, Italy as a delegate to Slow Food International's inaugural food producers conference. After hours in the Nebbiolo wine tasting room sampling every slice of prosciutto he could get his hands on, he knew he had stumbled across his Holy Grail. From this moment on, Aaron embarked on a journey to produce the Northwest's first prosciutto fattened on hazelnuts. Aaron has since worked tirelessly to develop Tails & Trotters — that is, when he isn't loading up on gyro's at Cedo's Falafel.

I spent my freshman year of college in Chicago. As a cash-strapped student I spent most of my time exploring the chicken-shacks and hole-in-the wall eateries of the south side of Chicago. Being the birthplace of the American gyro and the meat cone, gyro and falafel stands were prolific and quickly became the late-night standard. I'm a gyro nut — if it's on a menu (especially late-night) I'm more likely than not to order it. Cedo's Falafel and Gyros is the best prepared gyro I've encountered since my Chicago days — the meat is consistently hot but not dried out, vegetables are fresh, and the tsatziki has a wonderful mint note. Whether ordered as a plate or in a pita, it's always incredibly filling and a great deal. Their falafel is of similar quality, a far cry from the dried hockey pucks I encounter elsewhere in the city, and the baba ghanoush has a great smoky note. The only downside is I've had to start calling in orders, since this is one place that if they are sold out I don't have another option to fall back on!

Where to Find Spooky and Fun Halloween Treats in Portland

A Slow-Fermented Pizzeria Is Coming to Sellwood-Moreland

Ruby Jewel closes all of its retail locations, PieVino is officially closed for good in Sellwood, and more Portland spots that aren’t reopening after the coronavirus pandemic ends