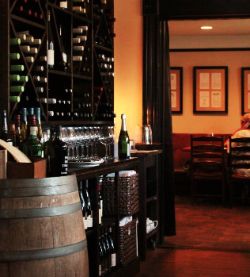 Andina's head chef, Hank Costello, says his love affair with food began when he was 11 years old, and this is obvious when you hear him talk about cooking. Costello lived in Spain for a year and a half and took every opportunity to learn about the cuisine: He learned to make paella from firemen in Madrid, learned the traditional Spanish cooking methods from family members in Galicia, how to catch and cook local seafood from the Mediterranean and tasted anything and everything in local tapas restaurants across the country. Throughout his childhood, Costello would intently watch how his mother and grandfather prepare each dish, and he says now that family still acts as his sounding board for new recipe ideas. Speaking of, Costello has found a new love in the Dundee Hills that just so happens to go by the name — listen now to Hank wax poetic about his new find, Newberg's Recipe.

I am enamored by the Oregon wine country. Especially the Dundee hills area. Living on the cusp of the valley I venture in to enjoy all its sinful delights as often as I can. One of my favorite establishments in which to indulge is a little yellow house in the middle of Newberg. Recipe is a disarmingly comfortable restaurant that lulls you into a state of relaxation that is excitingly juxtaposed by an eye opening crispness of flavors that this "neighborhood kitchen" creates. I appreciate the focus that each dish has. They are crystallizations of the ingredients and their flavors. I love bold and confident dishes that are exciting in flavor without being weighed down by a cornucopia of ingredients. The basil-cucumber Vichyssoise with lemon prosecco sorbet and trout roe is fresh with the subtle sweetness of the cucumber and sorbet playing happily together. While the pin pricks of brininess from the trout roe add teasing notes of saltiness. The pork tenderloin with white beans and pear hazelnut jam are a classic combination of the buttery beans enriching the pork. The pear hazelnut jam rounds out the richness by bolstering the flavors without overwhelming them. A meal at Recipe is reminiscent of a Zen retreat. You arrive with a mind and heart full of the tumultuousness of life. Then you take a seat on the front patio, order some plates and find that with each bite you gain a better perspective. You focus on the aromas of the food, the wine and the valley on a beautiful Oregon summer afternoon and leave soothed, calm and satisfied.