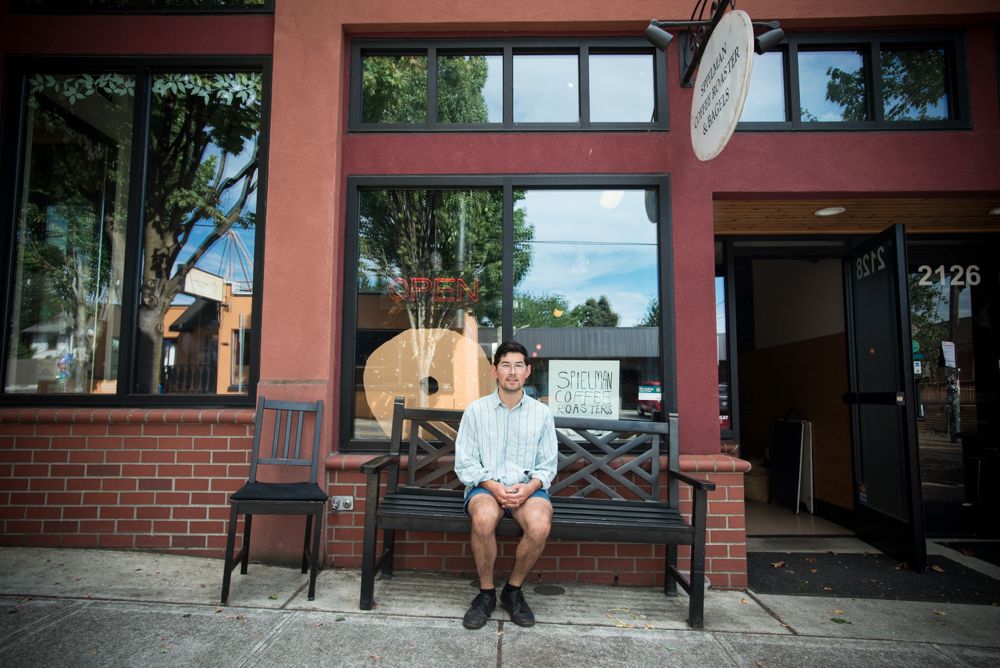 Perched at the counter of Spielman Coffee Roasters, a Portland mom equipped with Teva sandals and two soccer-ready sons examined the bagel shop's rack of cassettes, at least 150 tapes strong. Her laughter turned to longing, and she lamented: "What I could've done with mine, if I hadn't dumped them all." Dumping was the common fate of cassette collections everywhere, lacking the durability of CDs, the portability of mp3s, and the tonal depth of vinyl. In a culture of The Next Big Thing, tapes look anachronistic — at best, "quaint."

Almost all the tapes at Spielman's belong to Rafael Spielman, primary coffee roaster and son of owner Rick. Confirming that Spielman's is the only Portland coffee shop with an all-cassette soundtrack (that he knows of), Rafael is a champion of the medium. As drummer and vocalist of local punk band the Woolen Men and founder of tape label Eggy Records, Rafael contends that tapes are an inexpensive, intimate and ephemeral way to exchange new music. As for the old and rare music on tape at Spielman's, like the Kinks and cumbia? It commands your attention. For the fourth installment of On the Record, Eater sat down with Rafael (who recommended a sesame bagel with chive cream cheese) to discuss the forgotten format.

What is your role at Spielman's?
I like to be the person making sure that the food and the coffee is as good as it should be, but I'm not a manager or co-owner or anything like that. I oversee food stuff, but I'm still an employee like everybody else.

So your dad [Rick Spielman] is the big kahuna?
Yeah he's in charge, and I kind of like it that way. I don't know anything about the finances of the business, or a lot of the nuts-and-bolts stuff. I'm mostly just trying to use our simple menu in the best way possible. The kitchen is really small, and there's not a lot of equipment in there, so we're trying to think about recipes, making sure they're simple and that the ingredients are cheap but still good.

When you're not manning the coffee roaster at Spielman, have you had time to stay involved in Portland's music scene?
It doesn't feel limited at all by the job. I'm not even there technically full-time. I don't want to be in a position where I feel like I have to go in every day and make sure things are functioning. I like helping steer the direction of things. In terms of the music scene, we [The Woolen Men] tour as much as we want to and practice as much as we want to and play as many shows as we want to, and I don't think I've ever had to say no to something important because of my job.

Has working at Spielman actually opened more doors for your musical projects?
I wouldn't say it's opened doors. It's actually made things easier the other way around. There are a lot of customers who come in who I know from the music scene. So, instead of Spielman's opening doors to the music world, the music world has opened doors for the bagel shop.

Are you still running Eggy Tapes?
Yeah, I just started doing that again. I'm starting to feel excited again about new bands and people doing music in Portland, 'cause it's felt like kind of a long stretch where mostly it was older bands slowly breaking up, and not a whole lot of new bands starting. But it seems like maybe things are changing in the scene and new stuff is happening, and it's nice to feel like I can step in and facilitate that, and help people get excited about new bands.

You grew up here. Why have you decided to stay in the Northwest when it feels like so many musicians are moving away?
I'm really interested in this city and the fate of this city. It's changed so much from the time I was a teenager, and I guess I'm kind of rooting for Portland. I feel like it has so much going for it, and it could really be an interesting place if people continue to put the energy into it that they have been for the last 10 or 20 years. Maybe it's less glamorous, or maybe it seems like there's less opportunities presented, but it feels like there's really a lot of open ground in terms of making opportunities for yourself. You can change things in the city and have a positive influence in the city, whereas if you move to LA or New York, it's hard to make any kind of mark there on your own. There's bigger possibilities — you could get a job at a fancy restaurant or something like that — but not as much opportunity to start things. 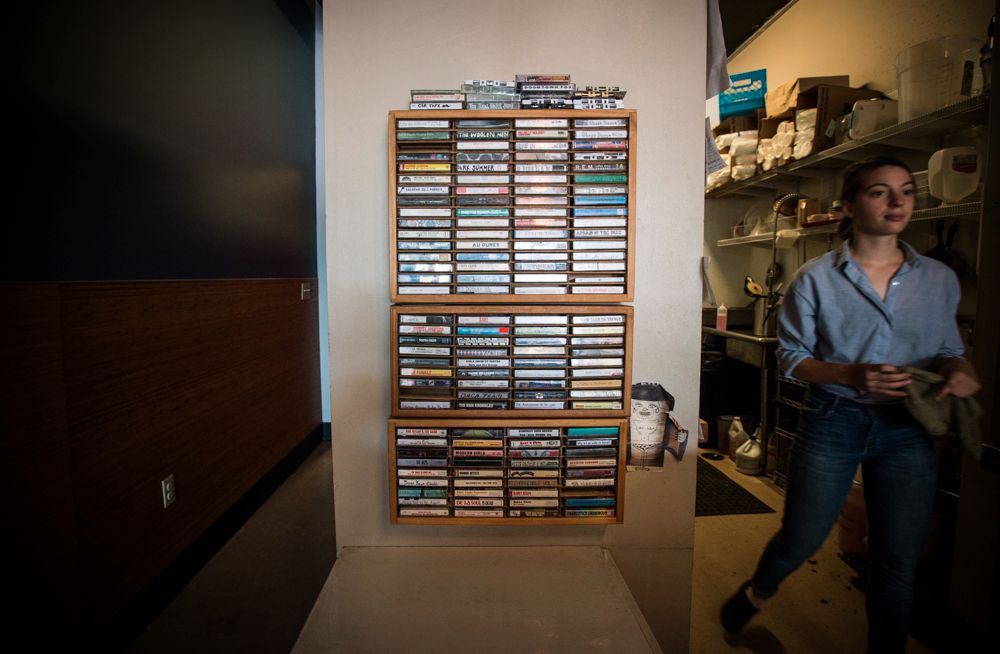 Spielman is unique in that all the music played there is almost entirely on cassette. Do you ever think about how the music you play informs people's bagel-eating experience?
Yeah, I think so. I do the coffee roasting, and I really do like coffee a lot, but early on I realized that an equal part of enjoying a cup of coffee, equal to the coffee itself, is the experience or the setting in which you drink the coffee. There are all these shops in Portland that have really incredible coffee, if you want to go and sit in kind of a sterile environment. A lot of places, the focus is so entirely on the coffee, and then it's just industrial concrete floors and white walls, and whatever new blog indie rock music is playing. The coffee is really great in terms of the coffee itself, and so much care goes into it, probably more than the coffee you're going to get at Spielman's, honestly. But coffee tastes better and the experience is better when everything around the cup is also good.

Spielman's tape display feels so democratic because customers can physically see the musical library. I'm sure people get a little too democratic about it, like, 'Oh, put that one on!' The tapes make customers feel like it's their own living room, and sometimes we have to be reminded that it's not! What tapes do you think get the heaviest rotation?
The Kinks tapes are often on. There's a tape of cumbia music, which I feel like gets a lot of play. There's a Lee Hazlewood tape that's often going. Lately I've been hearing a Willie Nelson tape. Lot of Kinks. Lot of cumbia. Lot of African music. Lee Hazlewood. Those are the big ones, I think.

Are there any tapes you wish you could play more often, but can't because of the high population of babies at Spielman?
The punk stuff. And a Sugar Hill Story record called Street Beat. We can't play a lot of the old hip-hop stuff because the lyrics are a little too real for the baby crowd.

Do they all belong to you?
A lot of them do. People will also often bring tapes into work and listen to them on their shift and then bring them home. Most of the tapes there are mine, but not all of them.

What percentage is that of your entire collection?
It's most of my collection, honestly. I mostly buy tapes to listen to them at the store. At home I have a whole lot of weird small press noise and drone, but all of the tapes that I listen to on a regular basis are all at the coffee shop.

The other day, I was talking about tapes and tape labels with a friend of mine, and she said, "Ugh, that doesn't even make sense, tapes are so irrelevant." What do you have to say to that?
To be an "irrelevant" format to listen to music seems like a pretty vague and questionable notion. I'm assuming that this person's assumption is that it makes the most sense to listen to mp3s. For me, tapes really are more convenient. At home I have a tape deck that's plugged into my stereo, and I don't have an iPod. If I want to bring music into the coffee shop, I have to use the tape deck there.

I also think the argument that music should be convenient is one I don't totally buy, because I think music at this point is too convenient. The way that people interact with music now, I think is not really healthy. You're not going to get very much out of it, because it's all on your computer and you're at your computer all day, and you can just start up a playlist and be checking blogs and writing emails, and that music is just in the background. At that point, there's no real purpose for the music other than to be mild background stimulation. In that sense, I prefer when things are somewhat less convenient and it requires your attention to listen to music, and ultimately you'll get more out of it that way.

There's also something nice about the disposability of cassette tapes. A lot of bands operating now, if you make a record, do you really need to press 500 or 1000 LPs? Often it makes the most sense to make 50 or 100 tapes and give them to your friends, because most of the time what [The Woolen Men] are doing isn't something that should be saved for posterity. If it has a short life as a cassette tape that your friends listen to, then that's perfect.

Where to Find Spooky and Fun Halloween Treats in Portland